Loann Goujon in as France resist wholesale changes for Scotland 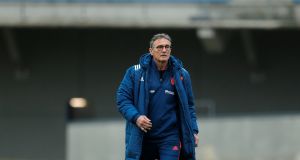 France’s head-coach Guy Noves has made just one change to his team following their defeat to England. Photograph: Benoit Tessier/Reuters

France have made one change to the side that narrowly lost to England for Sunday’s Six Nations visit of Scotland.

Loann Goujon replaces Damien Chouly at blindside flanker as coach Guy Noves otherwise sticks with the team that severely tested holders England at Twickenham until succumbing to a 19-16 loss.

He told L’Equipe: “This change strengthens the pack, even if the profiles of Chouly and de Goujon are essentially identical. There had already been discussion about this choice before the first game of the tournament.”

With Scotland having started the competition by surprising Ireland 27-22, Noves added: “We will mainly adapt to the Scottish rugby that you have seen evolve for four years.

“A game based on commitment, speed, aggression, with players who have gained confidence in a highly organised collective.”

1 Owen Doyle: Creeping professionalism of schools rugby a threat to the game
2 Coco Gauff pulls off biggest shock yet by beating Naomi Osaka
3 GAA officials and referees brace themselves as new rules kick in, and this time it's for real
4 Niall Quinn happy to step into the breach at FAI
5 Scotland’s Finn Russell missed training after Sunday drinking session
Real news has value SUBSCRIBE