Johnny Sexton’s value has never been so high 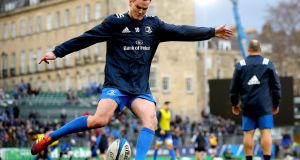 Johnny Sexton’s only defeat in 21 starts for province or country in 2018 was with Leinster away against Toulouse in October. Photograph: Ryan Byrne/Inpho

It’s a good news day when the World Player of the Year signs up for another two years with Leinster and Ireland, and in doing so Johnny Sexton has likely committed himself to seeing out his career with his native province.

Not that this two-year deal, which takes him up to June 2021, necessarily means his playing days will end at that point. Sexton will be almost 36 then but both he and Leinster coach Leo Cullen may have not been entirely joking when suggesting he might play on until he is 40.

“Stuart Lancaster has got me convinced I’m going to play ‘til I’m 40 and my wife is going mad,” he told Ray D’Arcy toward the end of last season.

Sexton’s wife, Laura, gave birth to their third child, Sophie, last August, a younger sister to Luca (5) and Amy (3). Hence it was always unlikely that they were going to up sticks and move abroad again as he did when joining Racing 92 for two seasons in 2013, an experience they did not entirely enjoy.

Unlike those protracted negotiations, when he was represented by Fintan Drury, there was no speculation linking him with moves elsewhere this time. Sexton signed a four-year deal up to the end of next year’s World Cup when returning home in 2015 and this time he is understood to have represented himself.

Of late too, the union are resigning their front-liners sooner and with less difficulty than on occasion in the past, and this new deal follows those of Conor Murray, Iain Henderson, Peter O’Mahony, CJ Stander and Tadhg Furlong.

Although 33, he remains among the best-paid players on the union’s roster on circa €500,000 plus, with potential add-ons based on appearances and results for Ireland, given the union’s preference for heavily incentivised contracts, as well as being an ambassador for Aer Lingus and Mace.

Rightly so too, for his value is as high as it’s ever been. Sexton’s only defeat in 21 starts for province or country in 2018 was with Leinster away against Toulouse in October.

Sexton’s deal, no less than the other aforementioned players, also reflects how content he is to be playing for Leinster, where he has assumed the captaincy this season, and Ireland, and also with the teams’ respective coaching set-ups for the next three years.

The good times have never been so good for Leinster, Ireland and Sexton, with the outhalf an integral part of a stellar 2018 which saw Leinster complete a Heineken Champions Cup and Guinness Pro14 double, and Ireland record a third Grand Slam in history, a first Test series win in Australia since 1979 and a first home win over the All Blacks.

That sojourn to Paris has also probably made him all the more appreciative of how well managed Irish players are. “We get looked after extremely well here and it is an exciting time for Irish rugby,” he said in yesterday’s statement.

Now in his 12th season with Leinster, in addition to his two years in Paris, Sexton has never been playing better. Much to the amusement and even slight bemusement of Cullen and Joe Schmidt, their outhalf has never been remotely inclined to shirk the physical stuff and he is continually targeted as well. Yet after that Racing hiatus, there have even been signs of late, touch wood, that he is becoming more durable again.

After being restricted to 15 games for province and country in the 2016-17 season, despite the demands of a Lions tour that summer he subsequently played 22 games for Leinster and Ireland last season.

“I just try and keep improving all the time and I put more emphasis on looking after my body, probably, than I used to,” he said in the week he was crowned the World Player of the Year and the Guinness Rugby Writers Player of the Year.

“That’s to do with age and injury-profile, going back two or three years ago when I was struggling, so I had to put a bigger emphasis on that. And you get to meet new people through the low points and they get you in better condition and you learn a lot through those times so I’m just proud of that really. You work hard, you work smarter and you learn all the time and sometimes things go your way. Sometimes they don’t, so that’s sport really.”

This, admittedly, is said after Sexton limped off with a calf strain in the win away against Bath last Saturday, prior to which Brian O’Driscoll commented: “I think he’s really matured into the captain and player he has become. He’s a very intelligent guy but brilliant rugby intelligence too. He’s almost got a photographic memory from every play that he’s been involved in, and some that he hasn’t, and he does not forget things. If you have dropped a pass from him or given him a hard pass three months previously, he’ll pick you up on it at training. He’s someone that never forgets.”

“So he drives this team. He is at the heartbeat of the culture and everything that represents Leinster. I think the World Player of the Year just typified 10 years of progress.”