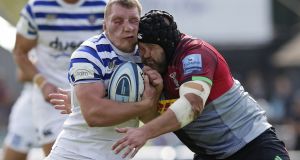 World Rugby’s policy of educating stakeholders on the significant dangers of head injuries and concussion is failing among a substantial number of current players.

In a survey conducted by the International Rugby Players (IRP) and published this week, 28 per cent of respondents said that they have hidden the symptoms of head trauma from medical staff and coaches in order to get back playing.

Although the world body will prefer to look at it in a positive way with most of the players complying with recommendations, the number will come as a stinging disappointment to campaigners for a safer game.

The majority of players (85 per cent) believe that medical staff are following the Head Injury Assessment to the letter of the law. Another 72 per cent say they have never hidden a head knock in order to start the Return to Play Protocol.

But with more than one player in every four continuing to be untruthful about symptoms, it begs the question of a cultural problem in the game that needs to be more seriously tackled.

Featuring every Rugby World Cup 2019 qualified team along with four emerging nations, Germany, Kenya, Hong Kong and Romania, more than 350 players responded to the survey on a range of matters during October and November of this year.

With concussion and the management of head injuries now one of the most talked-about areas of the game, the fact that over a quarter are risking their health to play has led IRP to believe the decision making process must now be taken entirely out of player hands.

“The fact that some players (28 per cent) felt the need to hide symptoms of a head knock so that they can start the return to play protocols, means authorities have to take the decisions out of the hands of players,” said International Rugby Players board member, Rob Nichol.

Former Leinster flanker Dominic Ryan was Ireland’s latest retiree, when he announced in September that he had quit rugby because of continued concussion issues.

Other important factors affecting welfare also arose with many players highlighting the loads they have to endure and expressing concern about being overburdened in training and playing too many matches.

This arrives just as Premiership rugby has decided to extend its season. Rather than lasting from early September to late May the Premiership season will extend deep into June with all summer tours earmarked for July.

When players were asked how many matches they had played in the last 12 months, 35 per cent said they played between 21 and 25, which was also the number of matches they said believed was the “optimum amount” per season.

However, when the numbers were broken down, more tier one (Six Nations and Rugby Championship) players (31 per cent) took part in 26-30 matches in the last year and 16 per cent of players at the top level played 31 or more matches.

With regard to injuries in general over half the players (54 per cent) believed training and lack of recovery time had the most impact on physical load. Other studies have shown that training accounts for around 85 per cent of a player’s work load.

The group were also asked what category of players they thought were more at risk from being overburdened during a season with more than half saying that international starting players were most at risk.

This weekend in Bath more than half of the Leinster team taking part in the European Champions Cup will be starting Irish international players.

In recent years players have also been pressurised into playing for their clubs before their country. This would be less so in Ireland because of the controlling influence of the IRFU, who have skin in the game at both provincial and international level.

When players were asked whether “you have felt pressured by your club not to play for your country” 23 per cent of them said they had felt this pressure, with 40 per cent of these succumbing to the pressure and not turning out for their country.

Overall almost half of the players who responded (47 per cent) said they missed between one and five matches last year because of injury, while one-third of those surveyed missed six or more games.

The number of players who missed 11 or more games was higher in tier one squads (19 per cent) compared to 10 per cent at tier two level.