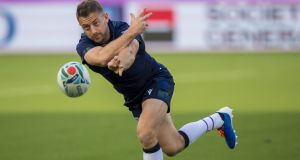 Former Scotland captain Greig Laidlaw cannot wait to get started in Japan after announcing he has signed for Shining Arcs.

The 34-year-old scrum-half is making the move to the Far East after leaving French outfit Clermont Auvergne.

Laidlaw was a popular figure with Japanese fans during last year’s World Cup.

A defeat to the hosts in the Scots’ final pool stage match brought the curtain down on his 76-cap international career but now Laidlaw is hoping to form better memories after agreeing to make a move to Tokyo.

The ex-Edinburgh and Gloucester back said on Instagram: “I look forward to bringing my experience to Japan.

“It is a country that has provided the warmest of welcomes every time I have visited. I can’t wait to get started.

“To now be making it my home and joining the Shining Arcs family is extremely exciting.”