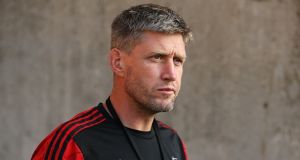 Ronan O’Gara has ruled out a return to Munster to work under Johann van Graan.

La Rochelle are in prime position to make O’Gara their head coach next season. Following talks with several French clubs, the 42 year old will make a decision in the next “10 days.”

“It’s decision time,” he told Off The Ball. “There are two or three other options [in France].

“I’ve got to decide what’s best for my career, and there’s some really tough decisions to make so hopefully in the next 10 days I’ll come to that decision but there’s nothing done.

“It’s a great position to be in,” he continued. “You just want to make sure you’re making the right move for you and your family. There’s a sporting decision and there’s also a family decision at stake.”

O’Gara confirmed his intention to become a head coach having worked as defensive coach with Racing 92 (2013-17) and an assistant to Scott Robertson at the Canterbury Crusaders these past two seasons.

“There are options at home as well, home being Ireland” O’Gara said, revealing that communication with Munster chief executive Garrett Fitzgerald has been regular since he retired, before adding: “I have spoken to Munster but there is no serious conversation in terms of the coaching position as I don’t want to go that route at the minute.”

O’Gara told presenter Joe Molloy the next move is to run a club and “if I’m good enough then I can get a job at home on my terms.”

La Rochelle, O’Gara confirmed, are interested in hiring him to work with Director of Rugby Jono Gibbes, who won four European titles as Leinster forwards coach before a tough period as Ulster head coach.

“Jono Gibbes wants someone to run the rugby programme, and that’s what I’m speaking to him about. These are good decisions. The family aspect is important, too. If it was purely a rugby decision my decision would be quite easy. But it’s not a pure rugby decision because thankfully I’ve got a good family.

“I’m ambitious and take it seriously, but you want to be valued and have the best chance to make it work wherever you go, so that’s what I need to get right.”

O’Gara also stated there was an approach to coach with France at this year’s World Cup but both parties decided “to pull the plug on that one.”

Despite the chance of a third season in New Zealand, his return to Europe is expected to be confirmed later this month while Munster, following the imminent departure of Felix Jones and Jerry Flannery, continue their search for an attack and scrum coach.