All may seem lost for Munster, but there’s always the chance of doing the impossible 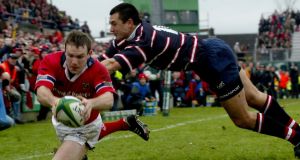 John Kelly of Munster goes over for a try despite the attention of Gloucester’s Thinus Delport at Thomond Park in January 2003. Photograph: Morgan Treacy/Inpho

Simple: win by 27 points with four tries or Munster’s European campaign was over. There were plenty of heroes – none more so than Ronan O’Gara, whose 80th-minute conversion of John Kelly’s try attained the seemingly impossible target – but New Zealand midfield duo Jason Holland and Mike Mullins, along with big Wallaby flanker Jim Williams, had a lot to do with out-muscling this Gloucester pack.

Donncha O’Callaghan and man of the match Anthony Foley were the local men who kept taking the fight to a very stubborn English side, but spare a thought for Henry Paul, the Rugby League merchant attempting to ply his trade at fullback in a dark, damp and increasingly noisy Thomond Park whenever he stood underneath an O’Gara garryowen. Munster coach Alan Gaffney claims not to have used the Gloucester game plan left in a Limerick taxi.

Myth tends to trump reality. The story goes that at half-time, with Northampton leading 22-6 after the Saints frontrow of Soane Tonga’uiha, Dylan Hartley and Brian Mujati obliterated the Leinster scrum, forcing Greg Feek into conclave with Mike Ross and the other forwards, Johnny Sexton gathered the backs around him to say that if Liverpool could recover from 3-0 down to Milan in the Champions League final so can Leinster. “I’m a United fan,” he said last year. “I made the mistake after the game of mentioning that match, but I didn’t actually say that in the dressing room. I just said in big finals in sport, teams come back.” Sexton’s actions speak louder than his words as 27 second-half points delivered what remains Leinster’s finest moment.

Eight years after the miracle, O’Gara pulled two match-winning drop goals out of his hat inside a week. Perhaps the true genius of La Rochelle’s coach is his patience. There is 83:22 on the clock, the scoreboard reads 20-21, and Munster have run out of bodies after Paul O’Connell and Denis Leamy carry into traffic. The ball comes to O’Gara flat to the line about five metres outside the Saints’ 22, where he weighs up all his options before realising the dire need to avoid being tackled in possession. He throws the ball into the night sky.

Journeyman South African prop Wian du Preez gathers as O’Gara slips into the pocket on the 10-metre line to allow Leamy play scrumhalf on phase number 40 before lobbing a drop goal between the posts. He repeats the trick down in Castres, bringing the curtain down on another nail-biter with an ear-to-ear grin.