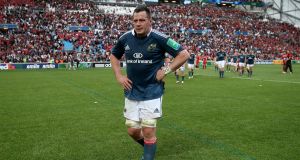 The former Munster number 8 James Coughlan has become the latest Irishman to head for the Top 14 by joining Brive as their defence coach and assistant forwards coach in tandem with the one-time French hooker Marc del Maso.

Coughlan, who played 137 times for Munster until ending his playing career with Pau for three years from 2014 to 2017, made his first steps into coaching when running the Pau academy for two years before becoming the forwards coach with Aix-en-Provence in the ProD2.

However The Irish Times has learned that Coughlan will link up with Brive’s head coach Jeremy Davidson, the former Ulster, Irish and Lions lock who has carved quite a reputation in French club rugby, on July 1st in readiness for the 2020-21 Top 14 season which begins in early September.

Akin to the former Munster scrumhalf Mike Prendergast at Racing, this is a very good move for Coughlan, whose switch from Aix-en-Province to Brive was negotiated by his agent, Niall Woods of Navy Blue Sports in Ireland.

Coughlin was the ProD2 Player of the Season when Pau won promotion from the division in his first season with the club, and played two seasons in the Top14 for them before retiring in June 2017, having made 69 appearances in his three seasons there.

In is two years with their academy, 27 of 30 players went on to sign professional deals and they reached a final against Clermont.

At Aix, Coughlan’s work as defence coach helped transform them from the fifth worst defence to the fifth best defence in the ProD2 and from the fourth worst scrum to the second best scrum in ProD2 before the Covid-19 pandemic halted and then finished the season.

His excellence as a lineout operator from his playing days has clearly continued as Aix’s ability to disrupt the opposition lineout was 75 per cent under Coughlan, so disrupting 25 per cent of the opposition ball.

Woods has also recently moved Irishman Peter Lydon from Ealing Trailfinders to Rouen (who also play in the ProD2 also and are coached by former England scurmhalf Richard Hill) on a two-year deal also as well as completing a full-time move for Leinster hooker Bryan Byrne to Bristol.