Jack Anderson: It is odds against players will succeed in claim against World Rugby

Legal View: The law of negligence is about foresight not hindsight

Former rugby internationals Steve Thompson (42) and Alix Popham (41) share their stories of being diagnosed with early-onset dementia as a result of repeated blows to the head during their playing careers. Video: David Dunne 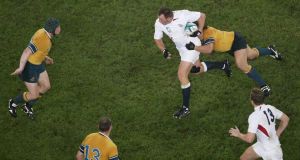 Australians hate losing. At the height of the country’s sporting success in the 2000s, the Rugby World Cup of 2003 is still seen as the one that got away. Jonny Wilkinson’s drop goal is rarely replayed on Australian TV. It is a forgotten sporting moment.

Playing that day for England was Steve Thompson who this week told us that he cannot now remember the game. He has been diagnosed with early onset dementia. While the loss in 2003 still irks Australia’s sporting consciousness, for Thompson it affects his daily life: how he relates to his wife and children, his work and, with probable chronic traumatic encephalopathy, it will, he says, only get worse.

The medical evidence on the link between repeated head trauma in certain contact sports and chronic brain injury in players is growing and not just relating to rugby. In 2019, a major study by the University of Glasgow concluded that former professional footballers are three and a half times more likely to suffer from dementia and other serious neurological diseases than the general population. The generation of footballers mainly affected includes those who also won a World Cup.

Cumulative head injuries in sport affects sports from horse racing to hockey. All levels of a contact sport need to take notice, especially at youth level. Here in Australia, the most exciting young cricketer in years, Will Pucovski, had to retire injured this week in a game against India A, after being hit by a bouncer on the helmet. It was the 22-year old’s ninth career concussion. Moreover, there is data emerging that women are more likely than men to get concussed and the effects are more severe.

World Rugby has been a world leader in collating medical data and using it to inform rule changes in the sport, to bolster its concussion protocols and to inform players of the risks involved and how to mitigate and insure against them. And if there is one important lesson for current rugby players and their associations from all this, it is to check their personal insurance policies.

In September, a former AFL player, Shaun Smith, who played professionally in the late 80s and 90s, received Aus$1.4 million (€870,000) in an insurance payout when the insurers agreed that he was “totally and permanently disabled” from the brain injuries acquired during his playing career. The AFL Players’ Association has since signed with a new insurance provider that accommodates cover for chronic concussion-related injury.

Thompson and others former players say that World Rugby’s updates over the years to its concussion protocols are still not sufficient and that in any event they have come too late for their generation, the first to play the game professionally. They argue that the players of today need more frequent and higher quality brain scans and baseline testing and that, in the absence of insurance cover, past players need to be legally compensated for their injuries.

Legal action by former players against sporting bodies for harm associated with head injuries has occurred in American football (NFL), in ice hockey (NHL) and at college level (NCAA) in US sport. While there has been some individual legal success, all three entities have reached settlements with their players.

Those settlements were seen to have mutual benefit for both parties because the legal hurdles in sustaining a case in negligence against a sports body are not easy to clear. Equally, sports bodies want to avoid the media blaze of former players climbing the steps of court and then giving direct evidence about their current medical status in a plea for compensation for basic medical costs and care associated with having played the game.

The settlements in the US were made on the basis of no admission of liability by the sports body but with clear commitments to fund the medical care of ex-players and to invest in medical research to protect future players.

Based on what has happened in the US and currently here in Australia – where a similar class action is being taken against the AFL; alternatives to costly, lengthy, adversarial litigation should be considered by Thompson’s representatives and World Rugby.

One alternative is to establish a “no fault” assessment scheme for past players. The scheme, funded by a levy on broadcasting rights for example, could independently assess the medical status and needs of former players. Ironically, rugby has privileged access to world-leading expertise in no fault assessment schemes given that personal injury claims in New Zealand are largely dealt with in this manner.

It is odds against the players succeeding in their claim against World Rugby. The first thing they will have to establish is that World Rugby owed them a duty of care. Rugby has been here before. In 2000, a case was taken against the then International Rugby Board (IRB) and others by a number of players in Australia catastrophically injured in scrums. The players argued that the IRB had a duty of care towards them to update the safety laws around scrums and that the IRB had not done so, thus contributing to their injuries. The Australian High Court rejected their argument.

Although the logic of that case would probably not hold today, given the regulatory reach of World Rugby, the players may still struggle to prove that World Rugby breached its duty of care towards the players. Unlike the arguments made against the NFL, which revolved around claims that the NFL knew the risks but failed to warn the players and may even have tried to conceal them, World Rugby has been transparent about their concerns with concussion.

The standard of rugby’s protocols may be far better now than they were 20 years ago, but the standard of care that a court would look at is what applied at the time Thompson and the others played and not those of today. The law of negligence is about foresight not hindsight.

The key legal issue in the US surrounding concussion, and a main reason why the players agreed to settle, is what is called causation. While medically it would appear that CTE in retired players is linked to repeated head trauma in games and training; legally, causation focuses on two specific issues.

Did any of us who love rugby, really appreciate that the professional code might result in incidents of chronic brain injury within a couple of decades?

First if there are multiple sources – at training, during games etc – and multiple parties – the players having played at different clubs and for their country etc – it becomes more difficult for the players to prove the exact causal source of their injuries.

It is also likely that they will be asked if there have been any lifestyle issues since retirement that might have contributed to their current condition.

In the case of the NFL, the latter issue, on the players’ personal history, got particularly nasty and adversarial.

As we have seen in litigation (since settled) involving Cillian Willis, the former Leinster scrumhalf, and Jamie Cudmore, the former Canadian international, (during his time at Clermont Auvergne) litigation of this nature will also ask questions of all those involved at the beginnings of professional rugby and not just World Rugby. Did national rugby unions, clubs and their employees, including coaching and medical staff, consistently implement concussion protocols on and off the field of play and especially when it came to player recovery and return to play protocols?

Finally, for some, the reply to the Thompson’s case is straightforward: you knew what you were getting into; you assumed the risks. But did Thompson and the others, did any of us who love rugby, really appreciate that the professional code might result in incidents of chronic brain injury within a couple of decades?

It looks like that question might now have to be resolved in a court. There may be no winners in that process. Litigation can be a particularly brutal contact sport.