Munster forwards coach played alongside hooker for England and the Lions 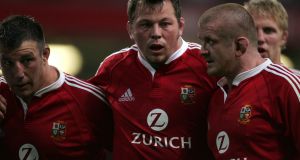 Steve Thompson’s harrowing account of being diagnosed with early onset dementia and his inability to remember anything from winning the World Cup with England in 2003 will have struck a particular cord with ex team-mates and friends, such as the Munster forwards coach Graham Rowntree.

Thompson packed down on his English debut alongside Rowntree against Scotland in 2002, the two going on to play many times together for their country and also with the Lions in 2005.

“It’s scary stuff, yes it is. It’s more than scary, it’s saddening,” said the visibly upset Rowntree in an online briefing with the media on Wednesday prior to Munster’s opening Heineken Champions Cup meeting with Harlequins at Thomond Park on Sunday (kick-off 5.30pm).

“It’s quite unsettling really. I played in that era, I had concussions. I played alongside Steve, played against Steve, coached Steve. He’s a mate. It’s just horrible. It’s proper saddening to hear that news. What can I say?

“But what I do know – the game has moved on. The players are looked after now, in particular concussion protocols, the way the game is refereed in terms of zero tolerance for high shots, etc.

“I have every confidence in how it’s handled now. All our protocols are in place as a club and a sport, I am very confident about that. But it’s sad news.

“I think you detect how unsettling it is for a player like me who has played in that era to hear this and talk about it.”

Asked about that 29-3 win over Scotland in 2002, Rowntree said: “In Murrayfield? Great game, great win that was. I played a lot with Steve and we had some proper ding-dongs as well with Northampton/Leicester games. I played for the Lions with him and then ended up coaching him right up until he retired. He’s a character, a good man, a good mate of mine.”

The Munster coaching staff have a tricky balancing act this week in blending the young guns who have recorded seven consecutive Pro 14 wins and the nine Irish players who’ve been on international duty.

“We’ve certainly had some of our longer selection meetings over the last few days because of the form of the young guys and particularly the young forwards,” admitted Rowntree. “I’m not going to name-drop them all because it’s not fair, so many of them have stepped up.

“There’s no algorithm or formula, it’s just feel from what we see from the lads on the coaching field and the necessity as well with injuries and guys being away. It’s all feel.”

In the backrow, Peter O’Mahony and CJ Stander are back in the mix, Fineen Wycherley has recovered from a groin injury, and then there’s the form of Gavin Coombes. The 6’ 6”, 110kg number eight (who turns 23 on Friday) has scored six tries in five games.

“Over-rated player. Sick of hearing about him,” quipped Rowntree. “No, he’s great. Like a lot of the youngsters, he’s doing everything we’re asking him to do and you can see in his performances he’s gaining confidence in his skills, and he works hard on his game. He’s still got a bit to go in terms of his fitness. He knows that.”

O’Mahony’s all-court performance in Ireland’s win over Scotland last week cannot be overlooked and Rowntree, part of the Lions coaching ticket which made O’Mahony captain for the first Test, knows what he brings.

“Just pure experience at the top level in the big games. He’s a warrior, Pete, a proper warrior. I love working with the guy. He needs to cheer up now and then. We’re working on that but nah he played well, didn’t he?

“I love his aggression. Even with a foot in touch he’s arguing with the touch judge. ‘Who put the line there?’,” recalls Rowntree of O’Mahony’s scowling rebuke of the assistant referee when having his ‘try’ disallowed.

“He’s good for the group because he pulls people along with his standards and his leadership. He’s more of a ‘follow me lads’ than a big speaker. I like that.”

Rowntree was forwards coach with Harlequins for two seasons until 2018, while his predecessor at Munster, Jerry Flannery, has since succeeded him in that role with the London club.

“Good club, got a bit of form recently, haven’t they?” said Rowntree in reference to Quins scoring ten tries in back-to-back bonus point wins over Northampton and Gloucester. “I like how they play. They play a particular style that can hurt you if you give them the time and space. They have got the players to do that.”

“I’ve not really considered the predecessor and successor thing. This is just a huge English club coming here in the first round of Europe and I’ve said to you before how much Europe means to me and this club. At the moment, I’m worried about forward play and stopping them playing.”

After ‘Quins, Munster have a six-day turnaround before playing Clermont away, with the reverse fixtures to come in January. Whether a minimum of three wins or four will be required to reach the knock-out stages is not something Rowntree and co have given much consideration.

“We’ll take it game by game. I’m not going to say any more than that. We’ll give each team the respect they deserve. This is our first game. We’re at home, against a top, top English team, who’ve got a bit of form in the last two weeks. Game by game. Win the game.”

Chelsea condemn Liverpool to latest defeat; Gordon Elliott hearing to begin 07:37
Walk tall, golfers, and tell Leo that golf is not the enemy at the gate 06:35
Mick’s millennium: McCarthy clocks up his 1,000th game as manager 06:00
The interpros give players a chance to prove the coaches wrong 07:09
Pro14: Munster-Connacht rivalry set to take on a sharper edge 06:00
Crossword Get access to over 6,000 interactive crosswords