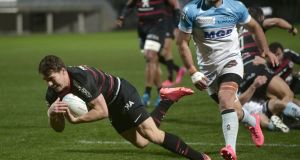 Toulouse arrive in Belfast with a clearly defined playing blueprint for the opening stanza in this season’s Heineken Champions Cup as head coach Ugo Mola has selected an outsized pack and stocked the bench with another six forwards. There will be a surfeit of bludgeon to complement the rapier like qualities of the backline.

Quite apart from an all-international frontrow, the visitors possess a big ball carrying back five and on the bench include Yannick Youyoutte and Emmanuel Meafou, both of whom are secondrows by inclination, and Louis Maudale, who is a lock/backrow hybrid. Last year’s captain Jerome Kaino is an absentee.

Mola has retained 10 of the team that won away to Bayonne (24-20) in the French Top 14 last week, four up front and six of the seven backs. The only alteration is on the right wing where Matthis Lebel replaces French international Yoann Huget. The orientation remains the same with Thomas Ramos at outhalf and Romain Ntamack at inside centre.

One interesting tete-a-tete is the respective scrumhalves, John Cooney and Antoine Dupont; the latter who would have a reasonable claim to be the best in his position globally from an attacking perspective. Both are key players for their respective teams, their influence largely predicated on the work of those in front of them.

Ireland head coach Andy Farrell will be watching closely as Cooney, following a slow start to the season, was close to his imperious best recently. Another player with a vested interest and a more direct one in how Cooney performs is his halfback partner, Ian Madigan, named at outhalf in the absence of the injured Billy Burns.

While recognising the cumulative threat posed by last season’s beaten semi-finalists, Madigan admitted: “He’s [Dupont] a guy who picks up a lot from the base of rucks and tries to fish out defenders. He’s got great evasion and speed himself, but it’s also what he does to the defensive line.

“He can pull defenders out, create indecision and then he’s got guys running great lines off him. If you let him play on top of you and you give him time then the guys around him will look really good. The challenge will be taking his time away and taking his options away.

“It starts in tight, getting our defence right there, putting them under pressure. If we get up in their face we feel we’ll be able to play on top of them. That’s going to be a big focus for us. We’re the team that’s playing at home and we’ll be looking to step up physically, be prepared to go toe-to-toe with them.”

The two sides met in September in last season’s rescheduled Champions Cup quarter-final when World Cup winning Springbok wing Cheslin Kolbe scored a brace of tries in a 36-8 victory in Toulouse. There were a couple of primary lessons, one of which the importance of cutting off the supply to the wider channels, the other an absolute necessity to start quickly.

The absence of Iain Henderson, Burns and a handful of backs makes it a more difficult assignment but there are areas in which Ulster can exploit the power of Marcell Coetzee and Stuart McCloskey, and a little height advantage on cross-kicks to the wings. It’s dependent on getting quality possession from set piece, kicking shrewdly, being accurate at the breakdown and pursuing an aggressive line speed in defence.

The home side will have to hustle and harry, keeping the pace of the game up, rather than getting involved in a collision-fest. Dan McFarland’s side is unbeaten this season in eight matches but this test is light years removed from what they have faced to date.

They will have to be pitch-perfect to maintain an excellent record against Toulouse in Belfast and on that note it will require the courage to seek out the wider channels, be accurate and ruthless in taking chances and to play unerringly for the most part through the 80 minutes. The bookmakers have Toulouse as five point favourites and that seems about right.