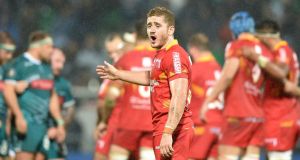 Perpignan’s Irish fly-half Paddy Jackson will not be making the trip to Galway.

Paddy Jackson will miss Perpignan’s Challenge Cup match against Connacht at the Sportsground this weekend after being left out of the French club’s travelling party.

The former Ulster and Ireland outhalf said in October that “it would be great to play on Irish soil again” but will not be making the trip to Galway. Perpignan, winless in the Top 14 this season, have named a 26-man panel without Jackson and will instead rely on back-up outhalves Enzo Selponi and Paul Marty.

Jackson, capped 25 times by Ireland until the IRFU revoked his contract earlier this year, has been linked with a move to Lyon at the end of the season if Perpignan, rooted to the bottom of the French Top 14, are relegated.