IRFU hopes to open contract talks with players in January 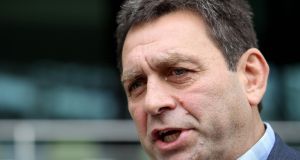 David Nucifora: ‘We’ve got to make sure that we continue to squeeze every drop out of the players we have.’ File photograph: Inpho

IRFU performance director David Nucifora hopes to open negotiations in January with players whose contracts are ending after this season.

All discussions with agents have been placed on hold due to the financial uncertainty caused by the pandemic.

The bottom line on most of these new deals will depend on crowds being allowed to return to the Aviva Stadium and provincial grounds in 2021. Empty stadiums will make it very difficult for Nucifora to offer long term contracts to a worrying number of Ireland’s professional rugby players, more than 100, that are out of contract in July.

“We have put player contracting on hold up to this point in time,” said Nucifora. “We had a financial review of the business scheduled for December, which was going to be the major decision maker on how we move forward with our player contracting.

“That was moved forward into the month of November to try and speed things along, to try and get an outcome or solutions as to how we could move forward with player contracting.

“Obviously, the financial review looks at the solvency of the IRFU and our ability to commit to multiyear contracts moving forward and not entering into contracts if we felt there was any risk we weren’t going to be able to meet our financial obligations.”

Nucifora continued: “As difficult as it is for the players coming off contract, we also have staff and a lot of other people in the same predicament. We have done our best to be responsible with the decisions we’re making going forward.

“We would hope there is some light at the end of the tunnel and that we will be in a position just on the other side of Christmas to hopefully have solutions that will enable us to start looking at our ability to sit down and contract our players going forward, but there are still some discussions that will need to be had with RPI [Rugby Players Ireland] before we can get to that point.”

The IRFU, in agreement with RPI, already reduced player salaries by 10 per cent with another 10 per cent deferral of wages for the second half of this year.

Nucifora initially scheduled his annual audience with the media to happen the Monday after a resounding victory over Georgia. He categorised results in 2020 as an “average return” for the national team.

“Obviously yesterday’s performance was disappointing, it wasn’t up to speed,” said Nucifora. “You heard Andy Farrell speak after the game, it wasn’t something that he or any of the coaching staff or the players, particularly, were satisfied with.”

The 58-year-old former Wallabies hooker, who is six years into his current role, reframed the Autumn Nations Cup as a period of redevelopment for Farrell’s squad.

“For the coaching group, the current period of time has been hugely beneficial . . . What have we learned out of it? We’ve used 40 players in the short number of games that we’ve had, which is an extraordinary number of players and that’s what this period of time was always going to be about.

“It was about looking at players that we wouldn’t normally have a chance to look at, combinations that we wouldn’t normally experiment with to see how they perform and for the coaches to be able to implement the way that they want to play going forward, and even though the performance yesterday was below par, we still have a lot of confidence that this team will turn it around next week [against Scotland].

“And for us, more importantly, it’s longer term, looking at the Six Nations, and I think by the time we get to the end of the ’21 Six Nations we’ll have a far better understanding of where we are.”

Nucifora also highlighted the importance to Irish rugby of South African franchises being added to an extended “Pro16.” Discussions with all the stakeholders to bring the four teams: Bulls, Stormers, Lions and Sharks to Europe from next season remain ongoing.

“So hopefully, the right commercial outcomes can be achieved for the South Africans to become part of the Pro14, to join and make it a Pro16.

“Sending teams, be it at full strength or with some of the younger players, down to play a tour in places like Cape Town and Pretoria and Johannesburg, playing full-strength South African sides, is something that I believe will hold the development of young players in good stead for a long period to come.

“We’ve got to make sure that we continue to squeeze every drop out of the players we have. We don’t have the size and playing depth of countries like England and France, so what we do we’ve got to continue to do well, we’ve got to expose our players at every opportunity to the highest levels of the game to make sure they’re ready to come through when required.”

Regarding the Ireland women’s current existence in limbo after the 2020 Six Nations was cancelled before the final match against France and the World Cup qualifiers postponement due to Covid, Nucifora suggested that these fixtures can be incorporated into the 2021 Six Nations.

“They’ve been severely disrupted. We’d be hoping that now that will be played possibly during or as part of the Six Nations competition. Those discussions and talks are still ongoing. So there’s been a lot of agility required to keep that team focused on the big year they’ve got coming up in 2021.”