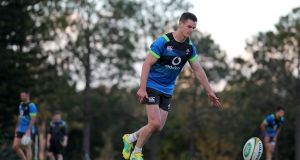 Johnny Sexton during Ireland training ahead of the Test series with Australia. Photo: Dan Sheridan/Inpho

The absence of Ireland captain Rory Best through injury for Ireland’s three match series against Australia that begins with the first test in Brisbane on Saturday (11am, Irish time) should have meant that coach Joe Schmidt had a straight choice between the two vice captains, outhalf Jonathan Sexton or flanker Peter O’Mahony, as to who would lead the team.

Best led Ireland to a Grand Slam in the recent Six Nations Championship and in doing so improved his win percentage to 67.30, thereby moving him up to third in the all-time Irish list behind another Grand Slam winning Irish hooker Karl Mullen (73.33) and Belfast born Ernie Crawford (70). Best leapfrogged Brian O’Driscoll (63.25) and Tom Kiernan (66.66) during the victorious run through the Six Nations.

However, word emanating from Australia is that Joey Carbery may start for Ireland, thereby denying Sexton – who has captained Leinster but never his country – the chance to do so at the weekend. Munster captain O’Mahony has a 100 per cent record in leading Ireland with three victories – against Canada twice and the USA.

But, on the basis that Sexton will someday get his chance to lead Ireland out and just to play devil’s advocate a little bit, this column had a look back at players who captained Ireland just once, drawing a line from 1938 to the present day.

As the graphic illustrates, there were seven, starting with Sammy Walker, who captained his country on his final appearance in a green shirt but that summer went on to lead the Lions tour to South Africa.

The Ulsterman saw Ireland slip to an 11-5 defeat to Wales in Swansea. Scrumhalf James Kelly was capped 11 times for the national team, once as captain, a 6-5 defeat to New Zealand at Lansdowne Road in 1963. The Irish side contained two debutants in wings Alan ‘Dixie’ Duggan and John Fortune, who scored a try on his debut. He would win just one more cap.

Ireland’s other points came from fullback Tom Kiernan while the All Blacks response was a try from Kel Tremain and a penalty by fullback Don Clarke – two standout figures in their rugby history. It wasn’t third time lucky for the next Irish player to lead out the national side for the only time as flanker Shay Deering, in the last of his eight caps, saw Ireland succumb 10-6 to New Zealand thanks to a late try from hooker Andy Dalton.

The match was played four days after Munster had beaten the All Blacks at Thomond Park and looked like ending in a draw as Tony Ward kicked two penalties for the home side while his counterpart in black Doug Bruce dropped two goals.

The one-time Ireland record try scorer, centre Brendan Mullin, couldn’t prevent his Irish side slipping to a 20-8 defeat at Lansdowne Road in 1995 – the late Anthony Foley scored Ireland’s try on his debut – while it was the English that did for Ronan O’Gara on his sole appearance as Ireland captain, a 33-10 thumping at Twickenham (2008) in what was to be Eddie O’Sullivan’s last game as Irish coach.

The losing sequence was eventually broken when Leinster scrumhalf Eoin Reddan marshalled an Irish team that beat Georgia 49-7 at the Aviva stadium. The last person to captain Ireland just once was Sean O’Brien, a World Cup warm-up match against Scotland in Dublin prior to the 2015 tournament in England.

Assuming that he leads out Ireland at some stage either on the Australian tour or at a later date Sexton will be hoping to improve upon a record that sees Irish outhalves who captained Ireland very much in negative equity, so to speak. It is a stellar grouping though.

Again, going back to the 1930s as a starting point Eugene Davy, won 34 caps, but the three in which he led Ireland were all defeats. Jack Kyle managed two wins and a draw in his six matches as captain. Only David Humphreys with four victories in five games boasts a winning record, while the last in the sequence is the aforementioned, O’Gara.

Given his competitive genes Sexton will be determined to finish on the positive side of the ledger both from a team dynamic and to buck the overall outhalf trend when it comes to the success rate of Irish outhalves and the captaincy.