Gerry Thornley: Joe Schmidt would love this Gold Coast seclusion all the time 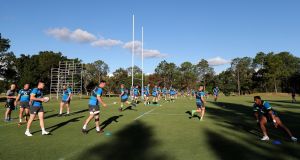 A view of the Ireland team training. Photo: Dan Sheridan/Inpho

For the second best side in the world right now, Ireland have been keeping a conspicuously low profile far from the madding crowds in their base on the Gold Coast. Which, of course, is probably how Joe Schmidt would like it all the time.

Since their arrival on Saturday, in two separate groups in the early morning and afternoon via Dubai and Abou Dhabi, the 32-man squad only adopted proper match week mode Tuesday, with meetings, gym sessions and a full training session at their luxurious base in the Royal Pines Resort.

While the first party of 16 players had a light runout on Saturday, Monday’s workload was confined to a gym session in the Bond University High Performance Centre, which was awarded a 2017 Strength of America Award for its world class strength and conditioning standards.

Bond’s HPTC was the only Centre in Australia to receive this prestigious accolade, which is jointly awarded by the US National Strength & Conditioning Association (NSCA) and the President’s Council on Fitness, Sports, and Nutrition.

Plenty of detail having no doubt been covered in the Carton House last week, the main objective since the squad’s arrival has been to recover from their long haul flights and ensuing jet lag with down days on both Monday and Wednesday, either side of Tuesday’s first full training session.

James Ryan says he has been coping “pretty well” with the jet lag, and added: “We had a strategy in place to combat the jet lag as much as we could. I was in the first group, so on the first flight we were told to only sleep for 90 minutes and then the second flight we could sleep as much as we wanted.”

“We had that in place and once we got here, we had to stay awake. We got here at 6.30am so we had to stay awake for the whole day, which was tough, but then I slept pretty well that night. For me, it’s been fine. I’m rooming with (Dan) Leavy, so we’re waking up a bit alright but it’s nothing major really.”

We have another down day tomorrow so I think I’m going to go to the wildlife park, see some koala bears and stuff like that

To add to the sense that they are far from the hordes, this is the winter off-season for the Gold Coast, a major tourist attraction. Yet even so temperatures have reached 20 degrees every day under clear blue skies.

On Monday’s down day, some of their squad tried their hand on the Royal Pines golf course, which is the annual home to the Australian PGA championships, but jet skiing was the more popular activity.

Others, such as Ryan, went to went to the Wet and Wild water park. “We have another down day tomorrow so I think I’m going to go to the wildlife park, see some koala bears and stuff like that. I’ve never seen them and they look pretty cool, so that’s the plan.”

All of this is part of the meticulous planning too.

Tuesday also marked Ireland’s first and only media day – or media hour – prior to relocating to Brisbane on Thursday, and thereafter – with a week in Melbourne and a week in Sydney to follow – all will change, change utterly.

Aside from the Irish travelling media, only two television crews from Fox Sport Brisbane and Channel 10, along with one member of the local print media were on hand, with the home rugby media availing of the Wallabies third media day in a row in Brisbane. They’ve a different way of doing things alright. Following on from the high profile duo of Israel Folau on Sunday and Will Genia on Monday, the entire squad were put up for interview yesterday.

While it’s true that Irish rugby is currently competing with the All-Ireland hurling and football championships back home, as well as other summer sports, Australian rugby union has always been a harder sell even in this sports-mad country where you can find anything from the tennis in Roland Garros and even bowling to rugby league especially, taking up most of the television daytime hours across various channels.

This first Test is also completely overshadowed by the first game in the three-match State of Origin series between Queensland and New South Wales in front of 90,000-plus fans in Melbourne on Wednesday night, which will as usual, according to my taxi driver, be “the only show in town” here and, one imagines, in most of Australia.

There won’t be a car on the road during the match, he ventured, before tooting his horn at a field of cows with the letters ‘QLD’ or ‘GO’ inscribed on them. Queensland have dominated Origin for the last 15 years, but a spate of retirements to five of their legends, along with a somewhat new and remodelled NSW team as well makes this series particularly unpredictable, much like how he regards the current Wallabies.

He also discussed the Gold Coast’s booming economy and population, which has grown from 230,000 to 560,000 in the last decades, in part due to a housing market which is more affordable than Brisbane. “You can buy a unit here for 400k, or go further out and buy some acreage as well,” he said. “But it’s a long term investment. You have to be here for the long haul.”

To compound the contest for coverage with Origin, the second test in Melbourne on Saturday week clashes directly with the Socceroos opening World Cup match against the star-studded French.

The back page of The Australian provided an accurate barometer of where this upcoming Australian-Ireland series lies, with the first Origin game afforded prime billing, followed by a secondary story on the AFL alongside it, and below these a cricket piece across six columns with Genia’s thoughts on the series occupying two columns in the bottom corner.

Origin dominated front and back pages of the Brisbane based Courier Mail, as well as the next six pages of its sports section, with the Genia interview eight pages in. But the latter merited only three abbreviated paragraphs, without quotes, in the sixth page of its sports coverage, which was also dominated by Origin.

This is testimony to the size of Ireland’s expat support and current standing in the game, which Michael Cheika has been showering with praise, while plotting how to undo some of his former Leinster players. He and the Wallabies are up for it alright, but then again when are he and the Walabies ever anything else?