Where were you when Ireland conquered the All Blacks? 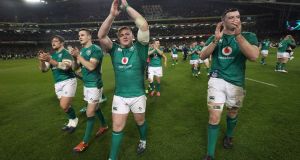 Where were you when Ireland conquered the All Blacks? Photograph: Billy Stickland/Inpho

Ireland’s 16-9 win over the All Blacks on Saturday night will be talked about for generations. Joe Schmidt’s side produced one of the greatest performances in Irish rugby history as they outplayed the back-to-back world champions in Dublin, securing first ever win over New Zealand on home soil.

More than 50,000 supporters packed the Aviva Stadium to roar Ireland onto victory, and to help smash a 113-year hoodoo into pieces. But away from Lansdowne Road the rest of the nation - the rest of the world - packed out pubs, clubs, bars and living rooms to see history being made.

Where were you when Ireland conquered the All Blacks?

And we are asking you to tell us your story, in the wake of Ireland’s famous victory. Where were you when Ireland conquered the All Blacks?