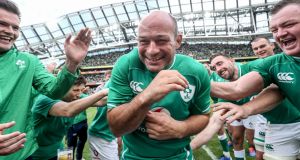 Ireland’s Rory Best leaves the field to a thunderous ovation after the game against Wales in the Aviva Stadium on Saturday. Photograph: Dan Sheridan/Inpho

On the proviso that Keith Earls’s quadricep injury is as insignificant as initially presumed – and hence, miracle of miracles, no World Cup casualties in four games – this send-off could not have been scripted much better.

Imagine the applause for Rory Best and Joe Schmidt after their final home game had Ireland just lost. Rather than forced, or even desultory, it was a warm thank-you by a celebratory crowd back on board the Good Ship Ireland.

Incredibly, this was Best’s 58th home match for Ireland (and 39th win, with two draws and 17 defeats) since making his test debut against the All Blacks in November 2005. It was also his 18th as captain at the Aviva Stadium, with a win-draw-loss record of 14-1-2.

Schmidt singled out Best’s ovation as he departed in the 53rd minute as his highlight of the day.

“I think for me, because I see how hard he works and because he is a bit of a rock for us, I think the standing ovation for Rory Best – absolutely merited.”

Leaving aside that world number one ranking and the failure to press home their final-quarter dominance with a fourth try, the performance also ticked most boxes. The scrum went well in a battle royal which, as ever, was well refereed by Mathieu Raynal, ensuring both sides had good ball to play off, with minimal resets. Nor did it seem to be in any way weakened after four of the tight five were replaced, including Best and the tight-sided lock Jean Kleyn.

One could feel the tremor of trepidation through the crowd when Justin Tipuric and Alun Wyn Jones picked off Best’s first two throws, although there was little wrong with the trajectory of the second one. But that only made winning the subsequent 10 all the more meritorious, even if many of them were to the front, and again Sean Cronin replacing Best did not affect things. Unlike Twickenham, the trepidation did not extend to the players.

Most encouragingly of all, one could see plenty of evidence as to why the recourse to physical power gave Ireland an added dimension in the collisions on both sides of the ball. The bedrock of the victory was Ireland’s defence, which was obliged to make 40 of its 104 tackles (only eight were missed) in that lineout-afflicted first quarter.

Kleyn provided some oomph alongside the ever-excellent James Ryan, as did Bundee Aki and Robbie Henshaw in midfield, the latter brilliantly chasing down Dan Biggar before the midfield pairing were splintered by Hadleigh Parkes’s almost unstoppable charge. But it was the collective effort which will have pleased Andy Farrell and Joe Schmidt.

Ireland were more like their real selves in the dynamism of their carrying and, as a consequence, the efficiency of their clearing out (recycling 112 of 113 rucks). Turning the screw with 78 per cent possession and 85 per cent territory, and a 10-1 penalty count after trailing at half-time, this was the front-running Ireland of 2018.

If there is a caveat to this it is, as Warren Gatland suggested, that Ireland can struggle when they come up against a team who match them physically against the one-off runners, keep their discipline and compete well in the air.

CJ Stander and Jack Conan kept showing up for work, although actually it was Josh van der Flier who augmented his customary defensive workload (leading tackler with 11 in his hour) with some eye-catching runs. Yet it was the openside whom Rhys Ruddock replaced and, Peter O’Mahony having been tried there last week, it could be that the Irish think tank will go big in Japan with their back-row against, say, South Africa.

There may be similar thinking with the Aki-Henshaw partnership in midfield. Each penetrated the Welsh red line with their offloading and understanding, and they also provided alternative go-to men for Ireland’s starter plays.

There were a couple of awry kicks by a slightly rusty Conor Murray and Johnny Sexton, but plenty of good ones

“Those two know each other inside out, they’re good friends and good players together,” said Schmidt, highlighting how Aki latched onto Henshaw’s first offload. “They played very well together on the front foot but also defensively they got to space. I do think our midfield defence with those two was very strong, but we have real confidence in the four midfielders that we have. They’re all very good defenders and they’re going to compete for spots.”

There were a couple of awry kicks by a slightly rusty Conor Murray and Johnny Sexton, but there were plenty of good ones, and variety too. There was also a zip, energy and physicality to their games, and both should be the better for the outing.

And then there was Oul’ Man River at the back. At 33 Rob Kearney has rarely looked in better nick. Quick and strong, his alertness and speed over the ground saved a try when Leigh Halfpenny kicked in behind for George North (he also assisted Henshaw in denying Biggar). Then, after Stander’s carry had put the Welsh defence on the back foot, Kearney took Sexton’s flat pass to fend Jonathan Davies, no less, and take Halfpenny’s tackle to end a 26-test tryless run dating back to the pool win over France four years ago.

“Rob is a long-term professional – he knows when to get on the upswing and I can’t remember too many games where Rob Kearney hasn’t played big for us,” said Schmidt. “The game we lost here in the Six Nations, Rob wasn’t playing, obviously, and we were experimenting, and we experimented a bit during the Six Nations and we wouldn’t normally do that.

“But I said at the time, we’d won three of the five Six Nations, we didn’t need another one of those. We need a semi-final in this big competition coming up. I don’t know if you’ve done too much farming, but if you try to chase the whole herd all you end up is chasing. If you corral things and decide where your priorities are I think you give yourself a better chance.

“But you need chance, you need that luck, you need a few things to go your way.”