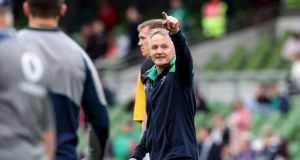 Joe Schmidt: “To the Aviva Stadium and what it means over the years, I have had some special experiences and absorbing the atmosphere.”

The ‘Game of Thrones’ theme music pumped out over the public address system with footage of the Irish team bus arriving to Aviva Stadium as the sun briefly burst through the translucent stadium roof. A World Cup fast approaching and the Iron Throne was up for grabs in Joe Schmidt’s final match in the Irish capital.

With Irish scars still raw from the surgery carried out three weeks ago in Twickenham, the fear was that the wounds from the English defeat would be compounded by a hammering from Warren Gatland’s Welsh side.

For the optimists and the dewy eyed saying their goodbyes to Schmidt and captain Rory Best, who retires after the World Cup, a more recognisable Irish team turned up and showed enough at least to swagger into Yokohama in 15 days time to face Scotland with a winning mien and a sharpened hunger.

“After a game relief is probably the primary emotion,” said Schmidt. “The boys that came off seemed in really good spirits. The performance we can be proud of I think. It was not necessarily pretty to watch but it was nice to get that result.”

Rob Kearney played like he was 23, not a decade older, beating George North to a certain try in the opening phase. Racing 50 metres from behind his posts the Irish fullback again demonstrated that his position is as much an intuitive understanding of the physics of time and space as anything.

For balance the fullback added his first try since the last World Cup at the far end minutes later while James Ryan plundered and carried in another unexpurgated edition of ‘Being James Ryan.’

But it was a day that belonged to the New Zealand coach, who must have initially bridled when Best missed his first lineout throw and a wryly smiling Johnny Sexton missed his first kick with Wales running Ireland side to side for the entire first quarter.

The pragmatists he is knows that quarters don’t win games and while Wales went into halftime 7-10 ahead, Tadhg Furlong and Sexton, soon after the break, readjusted the score line to 14-10 before the Irish hooker and captain made way.

Best pulled off his white scrum cap shortly after 50 minutes, looked wanly at the crowd in the West Stand and made his final slow walk towards the bench as the crowd rose to their feet for a standing ovation. The Ulsterman embraced his team mates, the glue, as Kearney had called him, that “keeps us together.”

“It’s obviously incredibly special this place,” said Best. “Like I said it some wonderful memories, some you have to use to try and be better. To get that reception from the supporters here, it’s nice for my mum and dad and my young family and my wife to be there to hear that.

“It’s nice to see that over a fairly long period of time you’ve done more things right than not. To get that appreciation is lovely. It’s nice to get the standing ovation and the applause but the performance and the result is far more important.”

Ryan followed Furlong over the line for 19-10 and the prospect that Schmidt’s beautifully timed run in his last match in Dublin would deliver a first world number one ranking for Ireland took shape and then hardened. For that, all hail the World Rugby algorithm.

“A label,” Schmidt called the number one world ranking. “We all know who are favourites for the World Cup and it’s not us.”

‘The Fields of Athenry’ briefly rung out as benches emptied on both sides. There would be no Welsh eclipse before Ireland headed to the land of the rising sun. The home side came close again forcing all the time to the end. The score didn’t matter. But the victory was gold.

Irish grunt more than sparkle finally earned them that and with it comes a much brighter departure to Japan, the Irish also coach leaving the iconic Lansdowne Road with an enviable record.

Schmidt has been to Aviva 34 times and won 28 of those games, drawing one and losing just five times. Irish rugby’s inheritance is Schmidt’s astonishing home win percentage of above 80 per cent.

“It’s been good to take the emotion out of it as emotionally connected as I am to the team and the performance,” he said. “To the Aviva Stadium and what it means over the years, I have had some special experiences and absorbing the atmosphere.

“It’s phenomenal for such an open stadium the volume of noise that gets created. We are incredibly lucky with the support we have. That was evidenced by the support that Rory got coming off today.”

It is a journey’s beginning, not a journey’s end. Ireland again look familiar. Schmidt sits on the Iron Throne.