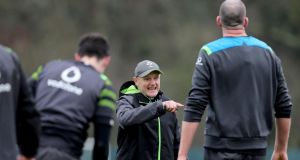 Joe Schmidt: “I’ve coached Dev for 10 years and he’s not just a lineout champion for us, he’s such a good player but he’s also an absolutely quality person.” Photograph: Dan Sheridan/Inpho

Joe Schmidt has revealed the extent of his anguish in informing those players who did not make Ireland’s 31-man squad, and none was assuredly more difficult than the conversation he had with Devin Toner.

The 33-year-old, 6’ 10” lock has been a mainstay of the Irish pack in the coach’s six and a half years in charge, and after playing under him for three seasons at Leinster, Toner has played in 60 of Schmidt’s 70 matches in charge of Ireland.

“I’ve coached Dev for 10 years and he’s not just a lineout champion for us, he’s such a good player but he’s also an absolutely quality person. That was an incredibly tough conversation yesterday,” Schmidt admitted in an interview on the IRFU website.

“Jean Kleyn, we probably don’t have a specialist tight-head second row, as such, and again at the start I said about the balance that we’re looking for across that squad of 31. So Jean Kleyn fitted that.

“Tadhg Beirne gives you the versatility of both the second row - and he’s teamed up very well with Jean Kleyn in Munster this year - but he also gives you the threat over the ball like a six or seven would, and he can play in the back row. Obviously he did for us on the weekend.

“James Ryan made an immediate impression coming back into the side and Iain Henderson, who’s promised so much, has performed as times incredibly well for us and we’re going to need him to very much put his best foot forward. So it was a very tight decision around Dev as well.”

Schmidt had described the “horrible” process of finalising a 31-man squad four years ago as the toughest days of his coaching career, and this was clearly every bit as agonising.

“It was a difficult thing right from the start to have the 45 that we had, and then we went down to 40 players but we still had the odd guy coming in and out. And to go from 40 down 31 was a really difficult.

“But we had a process whereby we looked through every training, looked through the games. There were some guys obviously had more experience, more credit in the bank and were more established and there were other guys were trying to force their way into the group. Trying to get a balance of current form versus previous performance is always a very, very difficult conundrum to try to solve.

“It was one of those typical selection meetings where 20, maybe even 25 of the players are listed straight away and then it’s those ones where you’re trying to balance, where it’s very difficult to choose between two players who offer slightly different things.

“You’re then trying to narrow it down, trying to get the best balance across the squad of the entire 31. That’s what you need to do, because you’ve a need to make sure you have got cover that’s immediate even though you can replace players. There’s obviously a big time delay in that.”

Kieran Marmion and Jordi Murphy were other players to have figured prominently in the past World Cup cycle who didn’t make the cut. Marmion started home wins over England and New Zealand and Schmidt admitted: “If you’re going to have a guy who is the quintessential team member, Kieran Marmion is someone you’d hold up as a guy who has done some fantastic stuff for us.

The calf injury which forced Will Addison off before the hour mark against Wales contributed to him missing out, with Chris Farrell making the cut as one of four centres, although Schmidt said this was not down to his physicality.

“It wasn’t so much that, it was more so that Garry Ringrose played really well on the wing for us. We feel that he can cover the back three. He can play fullback as well. He’s got such a good kicking game and we even had him on the bench at the weekend covering ‘10’.

“His versatility really allowed us to say that we’ve got three pure centres and Garry, who is a very good centre for us but has that versatility to move around the backline.

“I thought Will Addison was really good on Saturday. Unfortunately for Will it’s all just come a little too late. He picked up a little bit of a calf niggle after having come back and not having played the back end of last season, and he hadn’t had that much time with us. But he fits in so well and played so well.

“I thought Dave Kearney had a good second half. Those sort of guys. Jordi Murphy got on the ball twice really well and once there was quite a big side clean out, otherwise he would have got it.

“There’s not that much between this group and the guys who aren’t there, so at least we feel that if we lose someone then we’ve got someone who can step in and do a really good job.

“And those guys now have the responsibility and opportunity to go to a Rugby World Cup and I am sure they’re going to look to grasp it with both hands and try to kick on to another level now.”

Andrew Conway’s sharp and lively performance against Wales last Saturday when creating one try and having another ruled out for a marginal call of a forward pass against Jack Carty sealed his inclusion.

“Andrew Conway had a tough day in England, we were on the back foot a lot of the time. This time, he got a little bit of ball on the front foot, he picked a few great running lines. There were still some bits of the game he’ll try to improve on, I’m sure.

“The same with Jacob Stockdale. You want guys who can make half-chances into whole tries and I thought that’s what Jacob did in his second try and certainly in his first try, I thought Andrew Conway did incredibly well on the inside trail of Jack Carty on the link-up. Talking to Jack afterwards, he said that Andrew called that even before he carried, he felt there was an opportunity there.

“That’s what you want. You want guys who are really keen to be involved and be sharp and smart in their involvements as Andrew was there.”

Having confirmed Rory Best would remain as captain, Schmidt was asked if he had any doubts in his mind about this decision.

“I think there’s always doubt in your mind when you first start a Rugby World Cup build-up because people have to get through that period of hard work and it’s testing for everyone, including Rory.

“So I felt he worked really hard. It wasn’t a great day against England and again, without taking all of the responsibility off the players, I knew we were heavy legged, I knew we weren’t going to be at the top of our game. And if you try to get the balance of when do we most need to play well it’s still in three weeks’ time. Nobody wins a Rugby World Cup in a pre-World Cup test match.

“We knew it was a part of a process but even then it was incredibly disappointing, but in that game I still felt that Rory, despite the line-out not functioning overly well, around the park he did a very good job. In the last 20 minutes at the weekend I felt he led the scrum and he made a dozen tackles in 20 minutes. That’s not a guy who is miles away from being at his best.”

Schmidt also confirmed that Keith Earls and Joey Carbery trained yesterday, and Earls “will almost certainly play this weekend (against Wales) and train fully. Joey is further back and we’ll see how he goes.”

1 Charlesland Golf Club set to close permanently in December
2 Gordon D’Arcy: If South Africa moves up north, it could all go south
3 Mikel Arteta: Liverpool are at ‘the level we have to reach’
4 Tour de France: Every yellow jersey winner must feel guilty by some association
5 Sargent labels Hockey Ireland approach to Covid-19 return to play as ‘tone deaf’
Real news has value SUBSCRIBE

United, City and Everton all run out big winners to make quarter-finals 21:57
‘A real coup’: Villa sign Barkley on season’s loan from Chelsea 21:06
Mikel Arteta: Liverpool are at ‘the level we have to reach’ 21:04
Premier League clubs spend more than £1bn during transfer window 21:12
Newcastle survive almighty scare before seeing off Newport County 20:12
Crossword Get access to over 6,000 interactive crosswords