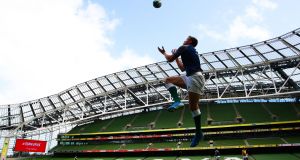 Venue: Aviva Stadium. Kick-off: 2pm. How to follow: The Irish Times liveblog will begin at 1.30pm. On TV: Live on RTÉ 2 and Channel 4.

The squads have been finalised, the World Cup is a fortnight away, and Joe Schmidt and Warren Gatland have reshuffled their hands. Accordingly, this landmark day also feels like more of a real deal. Such is his stature and presence that Johnny Sexton’s seasonal reappearance alone almost ensures that; likewise the Welsh totem, Alun Wyn Jones.

There’s no doubt that after that defeat, and a second beating by England this year, Ireland could do with a restorative win, thus ensuring a fond send-off from what is virtually a sold-out Aviva Stadium for what will be a final home game for Rory Best and Joe Schmidt.

Were it to come with a solid day in the set-pieces for the skipper, and especially the Irish lineout in the fallout from Devin Toner’s omission, all the better.

Throw in, so to speak, a continued improvement in Ireland’s line speed and tackle execution, a safe return to action for Sexton, Robbie Henshaw and Keith Earls, and signs of the Irish phased attack penetrating the famed Welsh defence, all the better again.

Yet it’s still a warm-up. Ireland’s opening pool game in two weeks against Scotland is inestimably more important, while any quarter-final would be a different stratosphere. Ditto Wales when encountering Australia and Fiji in their second and third matches. Hence a one-score loss and no injuries is preferable to a one-score win with casualties.

That being said, there will be no holding back.

“I think you have to fully commit to this game,” ventured Schmidt, “first and foremost, because there is always a risk that if you are half-pied at all, if you are trying to look after yourself for the flight over, you don’t get the flight because you are half a yard slow and you are slightly vulnerable somewhere.

“I think the best way to protect yourself is to be fully committed to the game and I think the players are driving that message amongst themselves and, hopefully, we’ll see evidence of that. If we can get a good performance and show we’ve slowly built through the last three weeks, having freshened up a little bit, starting to enter that phase of tapering to perform, I’d like to think that we can get our timing right and it should be apparent in the performances.”

Yet again, as an aside, the number one world ranking is up for grabs. Ireland, now second, can climb to the top for first time if they win, while Wales, now fourth, can bounce all the way back to the summit if they win by more than 15 points.

Wales have a team – and specifically a bench featuring Gareth Davies, Dan Biggar and Liam Williams – equipped to close out a game. It would also be no surprise if Schmidt and co remove Sexton and other frontliners before that endgame.

Last week, Gatland was denied a winning home farewell and, as in 2015, it could be that Wales will again win the return meeting in Dublin and similarly deny Schmidt and Best.

Best admits he didn’t enjoy last season’s procession of farewells: to the Six Nations, to the Kingspan Stadium and then to Ulster.

“I actually said to my wife afterwards, ‘I can’t cope with this. This is not something I like doing.’ That’s why subconsciously I haven’t given it much thought, or allowed myself give it much thought, because this is about performing and a bigger picture.”

Part of him also admits he’ll enjoy going back as a supporter, as he recalls doing at the 1991 World Cup quarter-final when aged nine and seeing Gordon Hamilton’s try bring a semi-final into view until Michael Lynagh’s try closed the door.

We have created some wonderful memories on the pitch, which I never thought I would

“There are all those little bits and pieces. To be honest, at the start, I used to go down mainly because we stopped at Monasterboice for steak on the way home.

This will be Best’s 58th and last home game with Ireland, and that his own kids are old enough to see him play this last while has been more special.

“I suppose that’s one of the decisions you make when you have kids a wee bit younger. That’s what you want for them. By hook or by crook, I hung around long enough so that they could remember it.”