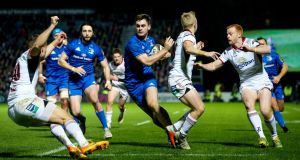 Conor O’Brien scores a try for Leinster against Ulster in the Pro14 clash at the RDS earlier this month. Photograph: Tommy Dickson/Inpho

In January, 2008, Conor O’Brien, aged 11, played for Mullingar minis during the half-time interval of a Heineken Cup match between Leinster and Toulouse at the RDS.

So it was perhaps apposite that a couple of weeks ago he made his European debut for the Irish province against the French club.

He punctuated the story with a smile and the observation: “I got four minutes both days. I suppose it was progress, in a way”.

On Friday night he will take his place in the Leinster team to take on the Scarlets in a season in which he has made eight senior appearances to date, scoring four tries.

A few weeks shy of his 23rd birthday, O’Brien has repaid the coaches’ faith, producing some excellent performances in representing the undoubted talent he possesses. He played against the other three provinces over the Christmas and New Year period and was registered for Europe in the week building up to the Toulouse match at the RDS.

O’Brien will start against the Scarlets and irrespective of whether he wears the number 12 or 13 jersey – he’s worn both this season – he will likely fulfil the ‘Robbie Henshaw’ role. He understands the comparisons.

“We are both footballers from Westmeath playing rugby. He’s a really good role model to have – without sounding too cringy. We are a similar enough build and our attributes are similar, strengths and stuff, so he’s the perfect person to have there to look at in training.

“When he is running round you in training you learn fairly quick to stop him or try your best to stop him. It’s unbelievable to have him there and he’s a lovely lad as well. He’s an unbelievable talent; I look up to that. That’s what I’m striving for.”

A conversation with backs’ coach Felipe Contepomi in which he pointed out to O’Brien the importance of not neglecting the strengths to work exclusively on weaknesses is something that clicked with the player who had focused on developing his range of passing and kicking.

“I’m always working with himself [Contepomi] and Hugh Hogan on trying to tidy up things and get rid of bad habits.”

He found out that he would be on the bench for the Toulouse match late in the week and was inundated with ‘good luck’ messages, although he refused to be distracted. O’Brien likes to watch matches so during the periodic warm-up processes in the in-goal area during the match, he found himself watching the action.

When eventually summoned in after 77-minutes he smiled, “sure I didn’t even touch the ball I think. I fell off Cheslin Kolbe; that was about the height of it”.

He’s a different mindset these days to the quiet soul who first walked into Leinster.

“The first couple of years I was in the Academy, I was maybe a little bit too shy or timid, being too nice. You learn fairly quickly, if you want to kick on, you have to know when to turn it on and focus.

“We’re all professionals in there at the end of the day, it’so competitive. I get on with everyone in there. At the same time, you want to be getting your work done. I am very realistic in the way I look at things. I’m not going to get carried away and be, like, ‘I’m a great lad’. It’s not the case.

“The lads have gone away to their camp for the Six Nations. There’s going to be opportunities against Scarlets. I’m trying to train today, train tomorrow, put my hand up for selection that. You will fall from grace pretty quickly if you think you are better than you are.

“Everyone has to have ambition though. I’m not afraid to go in and throw my weight around at training.”

He dismisses the notion that some young Academy players lack the competitive edge.

“No, even to get into the academy in the first place, you have to have it. Maybe, some lads have that extra gear. Elite athletes in every field have that extra gear that they can go into a dark place and have an edge. When they have nothing in the tank, they still have something to give you. That’s kind of what separates good from great.”