The Offload: Evidence not compelling in Lawes offside call 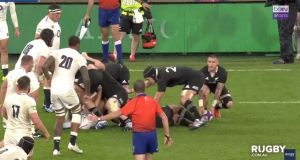 Sam Underhill will never score a try like that again. The brilliant young English openside is never going to bamboozle Beauden Barrett twice. The score can never stand so Twickenham’s great moment to topple the All Blacks has passed.

Referee Jerome Garces, from one metre away, saw no problem.

The sport keeps being tested by technology and technology keeps letting it down. According to World Rugby, the television match official can alter the referee’s mind, with the aid of replay, if the call is “clear and obvious”. Ben Skeen, spokesman for referees and TMOs, last week stated if the TMO can’t find “compelling evidence” that the referee’s live call is “actually incorrect then we stick with the on-field decision”.

“Jerome,” said TMO Marius Jonker as Swing Low boomed. “Okay, from the pictures I have, as the halfback [Perenara] picks up the ball number 20 white [Lawes] is in an offside position.”

Garces, the veteran French referee, responded: “So is it a try or it’s offside?”

Jonker: “No, it’s offside so you need to change your on-field decision to a penalty.”

Jonker: “Yes, as [Perenara] picks up the ball [Lawes] is in an offside position.”

Freeze the frame. As Perenara picks, Lawes moves to block the kick and Ofa Tu’ungafasi steps forward. From one frame to the next Lawes moves past the hindmost foot as Perenara’s motion begins.

The evidence is not compelling.

“It’s so little to do with me,” said Joe Schmidt when asked about the All Blacks being his greatest coaching challenge. “I step back on a Thursday and it’s really player driven. The fact the points differential is so narrow; there was the one in 2013, yep, I am still bleeding from that. It hurts when that happens and while Chicago was a great band aid, in fact it was a full bandage, two weeks later we were very, very much in the game and it was very tough, very very tough. As physical as it was tonight it was a step up last time they were in town.”

Let’s unpick this quote. Ireland’s success has a fair amount to do with him. On Thursday he steps back as much as Churchill did during the Normandy landings. Actually, scratch that, Winston never ran the prematch warm-up with Schmidt’s zeal. The points differential is 71-74. Yes, November 2013 hurt as much as Soldier Field brought joy while the 2016 visit of New Zealand to Dublin left CJ Stander and Robbie Henshaw in the concussion bin. It could have been worse. The brutality of that day, and refereeing of Malakai Fekitoa’s hit on Simon Zebo, reverberates.

“I am still bleeding from that . . . Chicago was a great band aid.”

24/17/1996 – James Ryan’s date of birth in the Ireland v Argentina programme proves he is not of this earth.

When explaining the decision to green-light Munster’s signing of Gerbrandt Grobler, IRFU chief executive Philip Browne was at pains to highlight the cultural differences in Ireland compared with the doping problems in South Africa.

The Times story of South African parents injecting their children with steroids was put to CJ Stander in Carton House last week. Stander was asked if he witnessed any of the widespread doping problems growing up in George or during his two visits at the Craven Week national trials in 2006 and 2008.

“Luckily I was in the sticks in schools,” said Stander. “The only thing I got was some good eggs, that was the only protein we got. The area I was from there was nothing like that, even when I moved to the Bulls [in 2009]. If it did happen I was probably raised in a house not to do stuff like that. I am not going to say it did not happen but if it did I’ve never seen anything like that.”

According to SA Institute for Drug-Free Sport chief executive Khalid Galant, the number of anti-doping rule violations at schoolboy rugby level continues to be “alarming” with a “the high tolerance of parents and coaches to doping practices”. Of the 122 tests done on teenagers during the 2018 Craven Week tournament there were six positives for anabolic steroids.