Gerry Thornley and Liam Toland report from the Aviva Stadium where Ireland have kicked-off their Six Nations campaign with a 32-20 defeat to England. Video: David Dunne 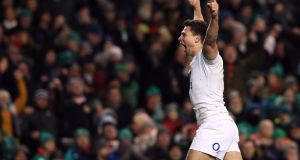 England’s Ben Youngs celebrates one of his team’s tries at the Aviva Stadium. His kicking wasn’t always accurate, but it kept Ireland pinned back and vulnerable to his side’s aggressive defence. Photograph: Brian Lawless/PA

There’s no good time to lose a match, but with so much interest in the Joe Schmidt bank losing games in this Six Nations is not a problem. But the manner in which it was lost is.

Last week I didn’t reflect on the Eddie Jones’ one-liners but his bottom line where an 80 per cent win ratio compared favourably versus Schmidt’s 74 per cent win ratio. I also pinpointed the five second recycle Ireland needed to impose on the visitors at ruck time.

Well I counted every recycle from the moment Tuilagi caught England’s first lineout right up to their first try. Every single one was less than two seconds.

Could Keith Earls et al have made a different defensive read as Jonny May touched down? Possibly, but the speed, power and variety with which England attacked Ireland in that opening two minutes pushed the Irish defensive systems to the absolute limit.

Which other teams are now out there waiting for their shot at the Irish, and can they mimic the English approach?

Rassie Erasmus is an extremely intelligent rugby man with a deep knowledge of Irish rugby and will be plotting for the strong possibility of an Irish–Springbok quarter-final at the World Cup.

The Boks are getting better all the time and, boy, do they like power. A new phrase crops up in professional sport every season, but after only 15 minutes sitting in the stands up popped the tackle stats on my monitor – ‘dominated tackles’. It wasn’t accompanied with a definition but one assumes it’s the ball carrier being dominated whilst being tackled.

Ireland’s famed (and predictable) one out carrier was being hit (smashed) well behind the gain line. When they stole a few yards they were chopped down by the Vunipolas et al with a serious need to resource and simply protect the Irish carrier and ball. Ireland had to flood in just to keep up. And after 15 minutes England had 13 dominated tackles to Ireland’s zero. It got worse.

For all those reasons we needed Sean O’Brien, Tadhg Beirne, Iain Henderson and Rhys Ruddock more than ever before. Of the starting second and back row players there was only one go forward carrier in James Ryan. Horses for courses, alright, but facing such power and a rapid recycle time was our enemy; an inability to slow it all down.

When Courtney Lawes smashed Garry Ringrose late in the game, I finally accepted that England have been working on their systems so much that a player of Lawes’ physical make up could make the intelligent defensive read as tried to get outside the smothering English defence.

Lawes made a quality read and Ringrose felt all the weight of a monster tackler. The result was penalty to England and a corner stone play from Ireland had been nullified by a second row.

Other systems England brought to the game included an extremely clever ‘escort’ of the Conor Murray box kick. Never before have I seen a system to manage the space between the arriving Irish player and the intended English recipient. Most teams will have a lazy runner filling the space but England went much further in setting a traffic jam, which was entirely legal, which made it almost impossible for Ireland to engage in a contest.

Another one of Ireland’s major tactics nullified. Plan B?

England went further with a phenomenal aerial display from Jonny May, a wonderful kicking game exposing Ireland’s systems and the back three. Jones and his backroom team may giggle at ‘boring Ireland’ but the volume of kicking Ben Youngs undertook was miles ahead of Conor Murray. The difference? Youngs’ kicking wasn’t always accurate, but it kept Ireland pinned back and vulnerable to his side’s aggressive defence.

A word on aggression.

Violent aggression requires tip-top timing and when it is slightly out players get badly injured – Earls will testify to this. There are less obvious ones, such as Tuilagi’s shoulder entry into an Irish breakdown.

Why is this important? Because it’s instructive when it comes to who can mimic England? Along with a superior systems sheet England, like New Zealand before them in 2016, brought a fair degree of controlled aggression that oft times spilled over. Both times we lost. Other teams will mimic this approach and we require a system to not just cope but prosper.

Then for some reason, Tom Curry’s sin bin, the English pace fell drastically. For a long period England looked almost rudderless, shifting over and back without anything like the pace they opened with. With the game slowing Ireland gained a foothold, their defence reloaded quicker and came off the line to frustrate England.

So yet another English tactic came into play – the grubber kick finding space and forcing Ireland to turn. One such grubber came from nothing and resulted in England’s second try.

How will Schmidt and his leaders reflect on last Saturday? It’s horses for courses as every Six Nations match brings with it entirely different challenges. Scotland are totally different.

In Saturday’s pressure environment having only eight scrums showed extraordinary skills from both teams, but one crucial Irish lineout malfunctioned and under English pressure the go-to Ireland plays were shut down.

There’s obviously no need to panic, but it was a poor start for Ireland and the manner of it will encourage our real competition down the line. Scotland are worthy opponents but South Africa remain a huge threat.