The mantle of 1948 was taken up by the three O’s: O’Driscoll, O’Gara and O’Connell 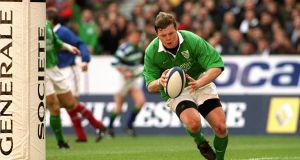 Ireland’s Brian O’Driscoll touches down for a try against France in the 2000 Six Nations. Photograph: Tom Honan/Inpho

The Six Nations only began with the 21st century.

It heralded Ireland’s first generation of professionals, who needed a decade and five runners-up campaigns before finally capturing the championship. On that same Cardiff afternoon in 2009, the 61-year wait for a Grand Slam also ended. A month later Karl Mullen passed away at home in Kilcullen, followed in 2014 by Jackie Kyle.

These pillars of the 1948 side could rest easy as the three O’s – O’Driscoll, O’Gara, O’Connell – took up their mantle.

By the spring Brian O’Driscoll’s hat-trick – to this day a magical, unmatched feat – ended a winless streak in Paris dating back to 1972.

Ireland gathered Triple Crowns in 2004, 2006 and 2007 to surpass Mick Doyle’s 1980s team for honours. All the while O’Gara kicked his goals, O’Driscoll kept scoring or creating insane tries and Paul O’Connell fought anyone brave enough to stand in his way.

Croke Park happened in 2007. The temporary shift across the Liffey began with the most gut-wrenching defeat imaginable due to Vincent Clerc’s late try before a sporting night that will never be forgotten as England were put on the rack.

There followed the Schmidt decade, again taking years to reel in another slam, but three titles elevates this period above all the others.

It can never be deemed a truly golden era because England and Wales attained similar heights. In fact, Gatland’s Wales had the last laugh with a fourth slam in 15 years at Ireland’s expense. Still, Wales’s win record of 57 per cent over this period, to Ireland’s 66 per cent and France’s 61 per cent, leaves them fourth in the pecking order.

Italy, formally accepted in 2000, offer a biennial trip to the Eternal City without ever creating any real sporting rivalries. That the Sergio Parisse years (2002-19) were punctuated by just 11 victories is proof of their near-irrelevance.

For all Conor O’Shea’s endeavours in laying the groundwork for the Azzurri to become a competitive beast in the 2020s, his three years as director of rugby completed a miserable four-season streak when the Wooden Spoon was repeatedly used to smack Italian hides.

Italy’s last Six Nations victory was at Murrayfield in 2015. There have been two seasons when they won two matches – 2007 and 2013 – but these campaigns also resulted in points differentials of -53 and -36. Since 2016 they have conceded an average 5.2 tries per match, scoring only 1.8.

If Italy are the runt of this litter, England remain its alpha despite constant challenges from Ireland and Wales

Scotland are glad for Italy’s presence as it allows them to be categorised as also-rans when in truth they have been the worst of the old Five Nations by some distance.

If Italy are the runt of this litter, England remain its alpha despite constant challenges from Ireland and Wales. The French resistance fell off a cliff since their third slam, and fifth title, in 2010.

Since 2012 France have finished fourth, sixth, fourth, fourth, fifth, third, fourth and fourth as a string of odd coaching appointments and general lack of fitness proved their undoing. But something is undoubtedly stirring. FFR president Bernard Laporte’s decision to give Fabien Galthié the keys to Marcoussis – with increased access to players, reduced numbers of foreigners in the Top 14 and rapid promotion of talent from the 2018 and 2019 under-20 World Cup winning teams – indicates an imminent revival.

What makes England so exceptional, even outside the 2003 (the greatest northern hemisphere team ever assembled) and 2016 Grand Slams, is their status as perennial contenders, with eight second-place finishes.

They have six titles, one more than Wales and France, with their worst finish being fifth in the injury-ravaged 2018 season.

Ireland’s similarly consistent record nudges them up to second in the pecking order due to seven runners-up spots alongside two slams and four titles.

Slaughtering England at Croke Park in 2007.

A monumental defensive effort at Stade de France in 2014 allowed Schmidt’s first season to end with the title.

Failure to claim a restart in the 78th minute of the first-ever rugby match at Croke Park allowed France to rumble towards the Canal End, where Vincent Clerc identified a mismatch in midfield against legendary Irish prop John Hayes. The electric French wing still had to accelerate past Denis Hickie and duck under Paul O’Connell.

Twickenham in 2008 put Eddie O’Sullivan out to pasture.

Defeat to Scotland in 2010 proved a deflating farewell to Croke Park.

Defeat to Italy in 2013, when Peter O’Mahony finished on the wing, leading to a worst-ever fifth finish and the end of Declan Kidney’s four years as coach.