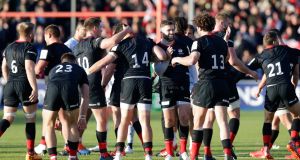 Saracens players celebrate after the victory over Racing 92 which clinched their place in the Champions Cup quarter-finals. Photograph: Henry Browne/Getty Images

Saracens, a club with “honesty” emblazoned on their main stand at Allianz Park, may well squeeze the last drop out from a rule-breaking squad with glory in Marseilles next May, but that would only serve to drench the Heineken Champions Cup in farce and disgrace similar to what the Gallagher Premiership is currently experiencing.

Munster, essentially knocked out by Saracens, have already paid a heavy financial price. Are Leinster next?

Even if Saracens successfully defend their title they will be excluded from European competition at least until the 2022/23 season.

You see, Premiership Rugby nominates English clubs for Europe and a Championship side – where Mark McCall’s men have been banished – will not be eligible.

This would be the first time since Bath won the tournament in 1998 that a team does not defend their crown (the English clubs refused to compete in 1999).

Despite the formal apology, Sarries men have yet to fully accept they are perpetrators of the biggest financial doping scandal in the history of rugby union.

“It is what it is,” said George Kruis, sounding awfully like a Love Island contestant when interviewed by Off The Ball. “I am aware people have different opinions on it. From being inside the camp I’ve obviously got a different opinion from a lot of other people.”

In the same interview, and without any supporting evidence, former Saracens lock Dominic Day implied financial irregularities could be occurring elsewhere: “There needs to be clarity throughout the whole league. I don’t think everyone can just point the finger at Saracens. Every single club needs to be looked at.”

They both seemed to suggest the unpublished Lord Dyson report is only scratching the surface. Kruis is eyeing up a move to Japan, perhaps knowing the roster will be sliced and diced in the coming months.

The Ireland attack under Mike Catt is expected to look a lot like Leinster when Scotland visit Dublin on February 1st. Many inside the national camp hoped that would have been the case at the World Cup in Japan but the previous management decided the 10-week preseason was not enough time to evolve their style of play despite glaring signs that the rest of the world had figured out the Schmidt patterns.

Catt only has two weeks to rejuvenate the side’s offence but Stuart Lancaster’s fascinating interview with BBC’s Chris Jones revealed a similar philosophy exists among the former England coaching ticket that disintegrated at the 2015 World Cup (all four coaches – Lancaster, Andy Farrell, Catt and Graham Rowntree are now coaching in the Irish system).

That bodes well for Leinster reintegrating players and “muscle memory” ahead of a quarter-final showdown with Saracens in Dublin.

At this time of year for as far as we can see into the future the other three provinces will surround Leinster’s roster like vultures eyeing carrion.

Increasingly, Connacht, Ulster and Munster will engage with agents to offer what professional players crave above all else: exposure.

“You almost want to breed a culture in Leinster where you leave at your expense,” said Johnny Sexton last year. “That’s what we want to build. So, if you leave and the other guy will get an opportunity in blue and we want to create an environment that puts him forward for international rugby.”

Yet again, something has got to give at openside. Will Connors nudged Jordi Murphy – who left Leinster for Ulster in search of more Ireland caps – out of the national squad but is the 23-year-old willing to sit behind Josh van der Flier, Dan Leavy, Max Deegan and even Scott Penny?

Munster could build their pack around Deegan if Leinster do not.

Same goes at scrumhalf; can Hugh O’Sullivan, Paddy Patterson and Rowan Osborne all afford to spend the next five years waiting behind Luke McGrath and Jamison Gibson Park?

Nick McCarthy already went to Munster but Ulster and Connacht should be in the market for quality back-up.

Harry Byrne is in Portugal this week with the Ireland squad but he’s fourth -choice outhalf at Leinster behind Ciarán Frawley, Ross Byrne and Sexton. Connacht would benefit immensely from his arrival.

“We have got this remarkable playing group who over the last 10 weeks have shown an incredible amount of resilience given all of the stuff that has been going on off the field.” Saracens director of rugby Mark McCall hails the double champions squad which only exists because the club cheated the £7 million salary cap.

42 - players used by Saracens in Europe this season.