Australia v Ireland: Make or break for Ireland in Melbourne 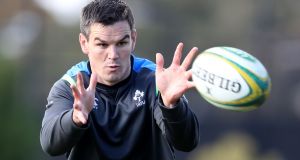 Johnny Sexton: “He throws himself into the front line, and he is 93kg and he makes sure that if people are coming down his channel, they know he is there,” says Joe Schmidt. Photograph: Dan Sheridan/Inpho

No two rugby games are ever the same, least of all, ironically enough, when the same sides meet two weeks running. Not only is one side seeking vengeance, but to this can be added changes in personnel, in individual and collective performances, in tactics, conditions, venue, referee and a host of other factors. Cue almost wacky turnarounds in the space of a week and rematches which resemble different sports.

This pivotal second test will either seal a series win for the Wallabies and condemn Ireland to a dead rubber next week in Sydney, or end a 39-year, 14-match losing streak against their hosts in Australia while also setting up a series decider. That’s some stick. That’s some carrot.

What makes this rematch after last week’s 18-9 defeat which ended Ireland’s run of a dozen wins in a row equally hard to predict is that Joe Schmidt has made eight changes to Ireland’s starting line-up. Furthermore, unlike the almost balmy night in Brisbane, the forecast is for a mix of rain and wind in Melbourne tomorrow, and it knows how to rain in Victoria.

This week, Joe Schmidt and co have worked on “a couple of areas we didn’t perform as well as we would have liked”. He assuredly had the scrum, breakdown and aerial duel in mind, while Ireland were also wasteful with possession after creating good attacking situations.

Schmidt and Greg Feek clearly believe that the return of Cian Healy and Tadhg Furlong, along with the installation of Niall Scannell ahead of Sean Cronin (who has evidently copped the blame for that 69th minute penalty last week) will go some way toward nullifying the Wallabies’ ability to scrum at an angle in between the Irish hooker and tight head.

The return of Dan Leavy should give the Irish backrow more of a counterfoil to David Pocock – the sharpest thorn in their side a week ago – although this will be a collective effort. Furthermore, if the forecast holds true, Ireland have the capacity to maintain possession through one-off carriers and runners off Conor Murray, which in turn will ensure support players are closer at hand to reduce Pocock’s influence.

As for the aerial duel, the choice of Andrew Conway in tandem with Keith Earls ahead of Jacob Stockdale – who was ruled out along with Iain Henderson and Bundee Aki in part due to slight injuries – doesn’t increase Ireland’s height on the flanks. But short of bringing on foot-ladders or trampolines, only so much can be done to counter the athleticism of Israel Folau. Not kicking restarts to him would be a starting point though.

Furthermore, the return of Garry Ringrose should improve the defence at outside centre, as well as providing more footwork in attack out wide. In an effort to rectify the costly effects of shooting up individually out wide, one hopes Ireland’s defence doesn’t become too passive. Under Andy Farrell (“We’ll see what the good old-fashioned Irish ticker’s about, won’t we?”) that seems unlikely.

And then there’s Johnny Sexton, hailed as “the maestro” by Michael Cheika yesterday. Sexton’s presence will give Ireland clear direction, through the variety of his game, his unrelenting probing through those around him, and his ability to sense and seize the moment,

Or as Schmidt put it: “That instinctive nature, clarity of thought, ability to read the game and direct people around the pitch. All those aspects, and his leadership. He and Pete share the captaincy. You label one the captain, but he and Pete are great mates, certainly they are in green – I know they are also red and blue – and between them they will lead and certainly Johnny is key to that. Pete will have his head down and his work cut out. Johnny will have his head up and directing us about.”

On the last occasion Sexton came up against an Australian side Down Under coached by Cheika on the Lions tour of 2013, the Waratahs clearly set out to rough him up, so how can Ireland protect him?

“Johnny is not prepared to protect himself,” said Schmidt with a broad if rueful smile. “He throws himself into the front line, and he is 93kg and he makes sure that if people are coming down his channel, they know he is there.

“I have tried to protect him for eight years of coaching him and he refuses. He is courageous to a fault sometimes Johnny, competitive to a fault, but they are also two of the things that everybody in the team and the coaching staff love about him, because he will bring both those elements to the team as well as that acumen and guiding the team around the pitch.”

In contrast to Schmidt, and as understandably, Cheika is set to field an unchanged 23 for the first time in his 46 games in charge since taking the reins in November 2014. In theory they should be better for last week’s run-out and another week’s training, but can they reproduce the same emotional intensity?

For their part, Ireland have the personnel and the game to prove a week is indeed a long time in rugby.