Depending on results, Ireland can still win the Under-20s Six Nations tournament 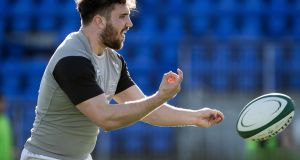 Eoghan Clarke during the captain’s run at Donnybrook. The player has been promoted to start against England. Photograph: Morgan Treacy/Inpho

Last season Ireland came within a whisker of denying England a Grand Slam before succumbing 14-10 at Donnybrook in a richly entertaining game the home side might have won.

Their hosts are once again in the box seat to win the tournament having won three of four matches with England’s only defeat coming against Scotland, whom Ireland beat last time out at Donnybrook.

Ireland head coach Noel McNamara, in his first season as coach, has presided over a reasonably impressive campaign, certainly from the perspective of Ireland’s attacking rugby. They lost 34-24 to a very good French side – Ireland were right in the game up until the last play – in their opening match at home and 41-38 to Wales, again in Dublin, while beating Italy and Scotland.

The main issue right through the tournament has been the brittle nature of the defence, individually as much as collectively and lapses in concentration in some of the basic tenets, like restarts.

That will have to change against an England side coming off a superb victory away in France, a game that saw two of the home side’s players sent off in the same incident for a horrendous dump tackle.

Ireland shows four changes and a positional switch. James Hume returns to the backline on the right wing with Angus Kernohan swapping sides to accommodate the Banbridge player’s inclusion.

Props Jordan Duggan and Jack Aungier return to the frontrow, where it’s a case of all-change as Lansdowne’s Ronan Kelleher misses out with a shoulder injury sustained in the win over the Scots.

Wanderers hooker Eoghan Clarke, a replacement the last day, is promoted to start while Diarmuid Barron has recovered from illness to take his place on the bench. Shannon’s Ronan Coffey is named among the replacements as is Sean O’Brien, a younger brother of former Ireland Under-20 international Conor, who is set to win a first cap.

Ireland trail England and France – the latter are away to Wales – by three points and can, depending on results, still win the tournament. It’ll be a tall ask against an English side coming off a brilliant victory.