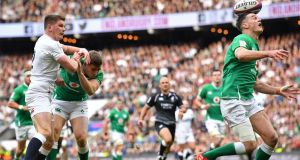 American novelist James Lane Allen once wrote that “adversity doesn’t build character, it reveals it” – a statement that will carry a certain resonance for the Ireland players and coaching team, individually and collectively, as they try to come to terms with the disappointment of Twickenham.

Ireland dug deep in the second half but that shouldn’t camouflage the threadbare nature of many aspects of the display. Forewarned, based on the last two matches between the countries, they should have been forearmed, but instead looked startled and desperately unsure – something that they only began to shake a little and sporadically in the second half.

1 Una Mullally: Leo Varadkar’s mask drops again
2 Coronavirus: Varadkar returns to practising medicine to help during crisis
3 Coronavirus: Primary school measures are reinforcing inequality, report says
4 Donald Trump’s clown car administration has put the fear in all of us
5 Genetics shed light on origins of Irish strains of Covid-19
6 Restarting Ireland: When and how will we ‘get back to normal’?
7 Coronavirus: Plans to move 600 consultants into public system hits obstacle
8 Irish doctors on getting Covid-19: ‘In 90 minutes, I deteriorated quite rapidly’
9 Dublin criminal Lawlor may have been shot dead by man who owed him money
10 How Covid-19 has changed the face of Irish shopping
11 Róisín Ingle: Everyone seems to have an ‘I met Matt Damon’ story but mine’s the best
12 Infected but feeling fine: the unwitting coronavirus spreaders
13 Why everyone over 70 should cocoon during Covid-19 crisis
14 Robbie Lawlor profile: A feared criminal with a long list of enemies
15 Coronavirus: Co Tyrone couple buried together after dying 20 hours apart
16 ‘Dad got the Spanish flu’: Clonmel man (104) sees historic lessons
17 What is Houseparty, the app everyone’s talking about – and not in a good way?
18 Tuberculosis vaccine ‘potential game-changer’ in Covid-19 fight
19 A Covid-19 vaccine may be our best hope for a return to normal life
20 Coronavirus: Social distancing on the beach as people ‘get the message’
21 Ireland has struggled to protect nursing homes from Covid-19
22 Man City to investigate Kyle Walker over lockdown sex party
23 An ‘Asian flu’ pandemic closed 17 Dublin schools in 1957
24 Coronavirus: Boris Johnson in hospital for tests as symptoms persist
25 Fewer deaths in Veneto offer clues for fight against coronavirus
26 Major building projects could be delayed two years after Covid crisis
27 Peter Murtagh in the Americas: 'I’ve left behind something that’s going to get an awful worse'
28 Coronavirus lockdown steps could remain into winter, says expert
29 Chinese ambassador in briefing with HSE over ‘unsuitable’ 20% of supplied PPE
30 Netflix has revealed its most-watched content. You might be surprised
31 Coronavirus: Construction industry collapses as restrictions take hold
32 Unions again urge change in wage subsidy scheme
33 Five men charged after garda car attacked at Traveller halting site in Cork
34 Nearly three-quarters of Irish businesses looking to cut employee hours
35 Paul Flynn: how to cook the perfect potato rosti
36 ‘Childbirth can’t be postponed’ – how Holles Street is coping
37 What sold for €535k in D7, Rathfarnham, Dún Laoghaire and Kilmainham
38 FG, FF set to agree principles to form new government
39 Ken Early: Mick McCarthy II was no blockbuster, more of a flop
40 Is ‘herd immunity’ a health policy or a by-product of spreading infectious disease?
Real news has value SUBSCRIBE