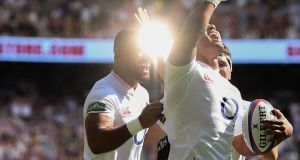 Manu Tuilagi of England celebrates with his team mates Joe Cokanasiga and Tom Curry after scoring his team’s third try against Ireland during the 2019 Quilter International Twickenham in August. Photograph: David Ramos/Getty Images

With the benefit of hindsight all of the half dozen countries from the Six Nations will have wished they’d done things differently at the World Cup.

But Test rugby, like life, quickly moves on and so much has changed in the intervening three months that no one can have a clear vision as to how the 2020 Six Nations will pan out.

So many retirements, so many changes in coaching personnel, so many new captains, so many new players. It all adds to the unpredictability of a fiendishly hard tournament to call. Andy Farrell is a fan, describing the Six Nations as “completely different” four times in one answer.

It’s almost surprising to consider that there have been three Grand Slams in the last four years, and 11 in the last 18 years

“Honestly, I’ve been involved in the Six Nations for a while now and I absolutely love the competition because of that unpredictability. People always have an idea on who’s going to win the Six Nations. It doesn’t always happen that way, does it?

“And that’s why I love the competition, the rivalry but at the same time the respect the countries have for each other, the highs and the lows, the expectations at the start and then someone loses and the goalposts change a little bit.

“There’s always different ramifications throughout the competition and nobody knows what’s going to happen until the last day and even then we’re probably guessing what the final outcome will be. We hope we’re there on the last day making sure we’re in with a chance of winning.”

Given the Six Nations’ competitive nature and host of variables, it’s almost surprising to consider that there have been three Grand Slams in the last four years, and 11 in the last 18 years.

Surprisingly too, it’s become a somewhat two-tier tournament in the last decade. Since France won their last title and Slam in 2010, remarkably Les Bleus have only finished in the top half once – when they were third three years ago.

The likely presence of Ronan Kelleher or Dave Heffernan, Max Deegan or Caelan Doris, John Cooney and others will reflect form and invigorate the Irish team. Word from the camp is that under Farrell, with Mike Catt aboard as backs coach, Ireland will also be less prescriptive and play with more width.

But for all of that, Ireland are one of three countries who have shared the last nine titles equally, with England and Wales, and no less than the supporters, Farrell and the Irish squad expect to be contenders again.

“So do we. I do, yeah. Winning is important. If we lose, we’ll learn from it. I’m not going to tell Johnny [Sexton] that we’re not going into a competition to win it .We want to win it and other teams will be saying exactly the same behind closed doors. Some shy away from saying it, some don’t, but we’re a team that wants to do our best. Yes, it’s about performing and progressing our game etc, but we want to win as well.”

Farrell also made it clear he will remain a hands-on coach.

“I don’t plan to be in this [suit] too much,” looking downwards at his suit and tie. “I might be at the weekend, I’ve not made a decision on that yet but I tend to be in a tracksuit most days and that’s the way it’s going to stay.”

We will be hearing plenty of references to that invaluable commodity ‘momentum’ in the build-up to next weekend’s opening round. To have a legitimate shot at winning the title, Farrell admitted that winning one’s home games is essential. Ireland have their biennial treks to London and Paris in rounds three and five, but that didn’t stop them claiming the title in 2014 and the Slam two years ago.

A winnable home game against Scotland first up next Saturday, with Wales to follow a week later, could be seen as a double-edged sword. But the ramifications of Finn Russell’s omission from the Scottish squad for a breach of team protocol must be significant. It could make them tighter, and Adam Hastings is a talented player, but Russell has been the creative linchpin of their game for four years and his absence could well destabilise their game.

It adds to the pressure on Gregor Townsend, one of only two surviving head coaches from last year’s Six Nations. Warren Gatland (10 campaigns out of 12, with two Lions sabbaticals) and Joe Schmidt (six campaigns) having moved on, suddenly Eddie Jones has become the longest-serving head coach currently in the Six Nations.

This tournament comes on the back of England reaching the final with their youngest ever World Cup side, and with the infusion of the Northampton trio George Furbank, Fraser Dingwall and Alex Moon and five other uncapped players, this squad is younger again, albeit losing Billy Vunipola was a significant blow and in his stead England’s squad has no specialist number eight.

“Of all the Six Nations squads we’ve picked, this is the most exciting squad we’ve put together,” said Jones.

And all with one modest little motivation in mind.

“We want to be the greatest team the game has ever seen,” Jones has proclaimed.

To that end, their semi-final performance against the All Blacks constitutes a benchmark which, if regularly reproduced over the next seven weeks, would make their odds of 4/6 to win the title seem like good value.

England are the team to beat, having finished in the top two for eight of the last nine years. Then again, everyone likes beating them the most, and they have only won two of the last eight Six Nations.

So it will be from the opening weekend, when France host les rosbifs next Sunday in the Stade de France, and England also travel to Murrayfield in round two before hosting Ireland.

Les Bleus are even more intriguing than normal, as Fabien Galthie heads up a new coaching ticket featuring Shaun Edwards as defence coach, and more than their counterparts France are already building toward the 2023 World Cup on home soil.

At 26 and with just 11 caps, Charles Olivon’s appointment as captain is clearly also with the longer term in mind, and the Toulon back-rower could well flourish in the role. But for Sébastien Vahaamahina’s thuggery against Wales, France would have reached the semi-finals in Japan, although in his absence they lack an enforcer in the second row.

However, there is an abundance of attacking X-factor when you think how virtually unplayable Virimi Vakatawa and Teddy Thomas have been for Racing, and with Damien Penaud fit again.

Finding the right combinations will be the key. Antoine Dupont is an exceptional talent at scrumhalf, but Romain Ntamack is seen as more of a ‘12’ and Galthie may be tempted to reunite the former Bordeaux scrum-half Baptiste Serin with Matthieu Jalibert.

At just 19, Jalibert had a desperately unfortunate debut against Ireland on the day of Johnny Sexton’s drop goal two years ago when suffering a cruciate ligament injury in a legitimate tackle by Bundee Aki.

Sidelined for 18 months, he has been the spark which has driven Bordeaux-Begles to the summit of the Top 14. Jalibert takes the ball to the line, has a good running game (five tries in his first ten games this season), is a good passer and has a strong kicking game, albeit like Dupont he can be impatient. Both 2018 and 2019 might have been different for Les Bleus but for Jalibert’s injury.

That opening game will go a long way toward defining their campaign. Win that, and they are contenders, but England are more advanced in their journey and it’s hard to believe a reconstructed French team with only one Thirtysomething can win the title.

So much has happened since last year that you’d almost forget Wales are the reigning Grand Slam champions. They also nearly reached a World Cup final, and despite the paucity of the regions’ performances, Wayne Pivac has assembled another strong squad, with his stated intention to build on the solid foundations under Gatland by broadening their attacking game.

His attacking options have been enhanced by the return of Taulupe Faletau and Rhys Webb, as well as Nick Tompkins and 18-year-old Gloucester wing Louis Rees-Zammit among four newcomers.

Also akin to Ireland, Wales have three home games, all against teams in blue, and so will be targeting three wins at the Principality Stadium as their threshold, with difficult trips to Dublin and London thrown in.

Their opening game against Italy marks the 20th anniversary of one of the greatest days in the history of Italian rugby, when the Azzurri marked their advent to the Six Nations with an emotional win over Scotland in Rome by their golden generation.

But for Franco Smith to reinvoke the spirit of that success after 22 successive defeats in the tournament, in the first campaign without Sergio Parisse since 2003, will be the most difficult task for any of the head coaches.

England remain then, the team to beat, and that meeting with Ireland at Twickenham on Sunday, February 25th, looks pivotal in many ways. The possibility of two or more being in the mix come the final weekend looks realistic.