Owen Doyle: Creeping professionalism of schools rugby a threat to the game 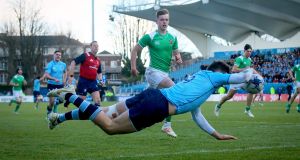 The 2019 Leinster schools senior cup final between St Michael’s and Gonzaga saw one team who looked like, well, schoolboys; their opponents looked like a Leinster pre-Academy team which, to a large extent, they were. Photograph: Oisín Keniry/Inpho

Between 2013-2018 a major rugby nation saw its schoolboy numbers decline by 17 per cent. If I told you that nation is New Zealand you probably wouldn’t believe me. But it was, indeed, rugby-obsessed New Zealand.

In Auckland, it’s also reported that 10 schools boycotted the prestigious St Kentigern College because the latter was “scholarship-recruiting” players from outside the province.

In a comprehensive review to address this “alarming fall off” reasons given for quitting included – “too competitive . . . not wanting to get ‘smashed’/injured . . . media influence on concussion . . . increasing number of bigger more physical players”.

Is Irish schools rugby immune to such a participation fall off? I’m afraid the answer is certainly not. While it is currently in good shape, and administered by some dedicated people, there are warning signs.

It already sees a very significant fall-off, as confirmed by an ESRI report, when children move from primary to secondary school. The same happens in late secondary school. After school the fall-off from the sport is massive, and there is no doubt that a lot of boys have just had enough of it at that point.

The huge collisions and dangerous entry to the breakdown must undoubtedly be a significant factor. These tally with the reasons for boys quitting in New Zealand.

Don’t doubt it for a moment, but parents are thinking twice about allowing their kids to play and it wouldn’t take too much for that ball to start rolling. Stopping it would be another matter.

One mother became so concerned that she wrote to a school headmaster advising that she would hold the school responsible if her son was injured. Following this letter matches were cancelled as insurance policies were checked; they were fine. But surely it’s not about worrying if the proper cover is in place, it’s about making the game as safe as possible so that the insurance will never be needed.

So, it’s a worthwhile exercise to look at that whole situation in the context of the schools cups which are now starting to get fully underway.

These schools cup games will see massive collisions and the breakdown will closely mirror the adult professional game. Boys and their coaches will naturally seek to copy their heroes and there will be occasions of – and there are no other words for it – ‘legitimised’ violence.

Players will hit hard into each other, heads will inevitably lead into the tackle as ball carriers seek contact; the clearing out will remind us of what we see in the professional game. Not good.

The real solution must come from World Rugby insisting that the current laws are applied across at all aspects of the game, or coming up with something which is safe for all players, irrespective of age or profession. Pressure needs to be put on World Rugby to do so, and quickly. That’s where the buck stops.

Meanwhile, there may be at least a partial solution open to the IRFU. It would require real leadership and a determined drive to ensure that all rugby at, and below, Junior Cup level (the Medallion Shield in Ulster), is played and refereed in accordance with the laws of the game – as they are written. Yes, it would give us a slightly different game, but it would be a much safer one.

All of the emphasis should be on real skills development.

Imagine for a moment, that players of this age would have to join onto a ruck, could not collapse it, not throw opponents out of it and would have to remain on their feet. It would be far less dangerous, and much the better for it. Other issues could also be addressed. Don’t forget that we’re talking about 14/15-year-olds and under.

Another thing is the amount of time these youngsters are asked to devote to rugby, and the schools have a responsibility here. One story emerges of a 14-year-old being dropped from the squad as he wasn’t going to be available to train through the summer. He probably just wanted a summer to go swimming and fishing. I hope he did.

That brings us onto the Senior Cup. The 2019 Leinster final saw one team who looked like, well, schoolboys; their opponents looked like a Leinster pre-Academy team which, to a large extent, they were.

It was a mismatch. There could only have been one winner from the moment the teams took the field. How safe was it, how safe will it all be this year?

It doesn’t get better when teams are matched in terms of weight and physique – it is even more gladiatorial.

A small number of schools across the country, who have had by far the lions’ share of trophies in recent years, invest hugely in their rugby infrastructure

I have recently watched schools rugby where the spectator parents gasped and winced at the force of the collisions. So did I.

By half-time several players had left the pitch with a variety of injuries – two looked nasty – and another player probably should have been taken off after a double tackle.

The senior schools teams provide very valuable talent into the pro-game, and it is difficult to see how this level can play differently from what they will face when they move into the provincial academy system. It has become, effectively, a feeder system.

Another issue is the conditioning, and then the bulking up of these schoolboys. We are led to believe that this all comes solely from work in the gym. But questions are out there in relation to supplements. How is it all controlled and monitored? Schools, I hope, do their best but, of course, they really can’t know what the boys might be accessing elsewhere.

A small number of schools across the country, who have had by far the lions’ share of trophies in recent years, invest hugely in their rugby infrastructure. These schools have facilities, training programmes and rugby staffing levels which are not far short of the professional teams. Others do not prioritise the game to the same extent, and this risks the sort of mismatch mentioned above. It also reduces the number of schools that can realistically provide players into the professional pathway.

Many young boys see professional rugby as a career, whereas the reality is that very few eventually transition to the pro-game. The truth is that those few who are good enough will be quickly identified. Otherwise, there are many other reasons for being at school; and all of the inevitably-termed “rugby schools” offer a lot more than rugby.

An interesting suggestion is that boys play by weight, not age. I’m not a fan of it, I’d be on the ‘against’ side in any debate: the weight of an under-13 player may be the same on the scales as an under-15, but it’s unlikely to deliver the same force or be equally developed. Also, the 13’s are very unlikely to have similar levels of overall maturity.

Schools rugby teaches important lifelong values and principles, amongst them fair play, how to win well, how to lose well, respect for opponents; and it creates a sense of team-camaraderie that is hard to replicate in other fields. It must endure, and to endure it must be protected.

It is a strange paradox that the copying of the professional mode of play into schools rugby actually represents a threat to the game. It is an unwelcome and unintended consequence of professionalism. Any doubters? Ask New Zealand.

Winston Churchill once said “I never worry about action, only inaction”.