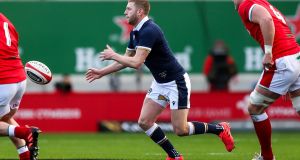 Finn Russell is back in action for Scotland. Photograph: Rogan Thomson/Inpho

This could be a defining campaign for Scotland under Gregor Townsend, as they aim to continue their development into a side capable of regularly troubling the elite. Last year’s results are probably a fair reflection of where Scotland currently stand. Their 2020 Six Nations campaign got off to a slow start, as they were beaten 19-12 by Ireland in Dublin before England won 13-6 on a wild, dog day afternoon at Murrayfield. Two defeats which could have been so different - the Scots stuck below a glass ceiling once again. But those narrow losses sparked a run of five-consecutive Test match victories - granted, a run which started in late February and stretched out to the middle of November. The second of those wins was the most eye catching - France had looked every inch Grand Slam winners until they went to Edinburgh on March 8th and were beaten 28-17, a statement win for Townsend’s side before the world stopped turning.

Scotland finished fourth in the Championship last year and matching that at least must be their target for 2021. That won’t be easy, with other sides - including Wales - likely to improve this term. As ever, part of the battle for Scotland will be matching other sides physically. They don’t have a forward arsenal packed with brooding beasts like England or France, but what they lack in size they can make up for with waspish tenacity through the likes of the excellent Jamie Ritchie and Hamish Watson. The absence of hooker Fraser Brown, who misses the tournament with a neck injury, is a big blow. There is plenty of flair in the Scottish backline with Finn Russell back in the number 10 jersey after a spell out in the cold, while 21-year-old centre Cameron Redpath - son of former scrumhalf Bryan - is an exciting addition to the squad, after he snubbed England in favour of the Scots.

Scotland travel to Twickenham on the opening weekend, where they haven’t won since 1983. Cause an upset in London and they could have a Championship to remember.

Gregor Townsend is heading into his fourth Six Nations Championship in charge of Scotland after he took over in May 2017. But while his tenure has included some landmark performances and victories they have lacked the consistency needed to sustain a title charge, finishing third, fifth and fourth in the last three years. While last season was heavily disrupted five Test victories in a row, including wins over France and Wales, was a glimpse of the form and consistency needed to turn Scotland into challengers.

Townsend has a fairly settled squad at his disposal and can call on Finn Russell to work his magic at outhalf, however he has a lack of options at scrumhalf and hooker. Townsend, who inspired Scotland to their last title in 1999, has been able to conjure something special out of his side on the big days - no more so than against England. The Scots won the Calcutta Cup in 2018 and retained it with a draw at Twickenham in 2019. Something similar on February 6th would be a testament to Scotland’s steady improvement under Townsend.

2020 didn’t work out too badly for Stuart Hogg in the circumstances. Granted, it didn’t start as planned, with the fullback dropping the ball over the line in Dublin as Scotland’s Six Nations began with an agonising 19-12 defeat to Ireland. But it was all uphill from there, with Hogg ending the year as a European and Premiership champion, with the Exeter Chiefs sweeping up at home and on the continent. At 28-years-old, Hogg is firmly in his prime and along with Liam Williams and Elliot Daly will be a main contender for the Lions 15 jersey in South Africa, if the tour goes ahead. Solid under the high ball, it is Hogg’s vision in the backfield which sets him apart, with his scything runs from deep one of Scotland’s most potent weapons.

Welcome back, Mr Russell. It was impressive that Scotland were able to string together five consecutive Test match wins while the mercurial outhalf was exiled last year, after falling out with Townsend over a hotel drinkning session. But regardless of how they coped without him, there is no doubting Scotland are much better off with him lining out at outhalf. 28-year-old Russell has always possessed limitless footballing ability, but now has the consistency to match his flare. His move to Racing 92 in 2018 has proven transformative, and his highlight reel from the French capital would be the envy of any player in the world. A generational talent, Scotland are a much more potent attacking force with Russell at 10, and along with Hogg he could prove the key to unlocking any defence.

Scotland’s opening fixture couldn’t be much tougher, but while victory at Twickenham is unlikely their performance could set the tone for the rest of the Championship. Wales and Ireland both visit Murrayfield and Townsend will know a successful campaign hinges on winning at least one of those fixtures with Italy visiting Edinburgh on the final weekend. Ultimately, it is hard to see the Scots improving in last year’s fourth place finish.