‘Big players get up. If they think they are right to play, let them play,’ says New Zealand coach 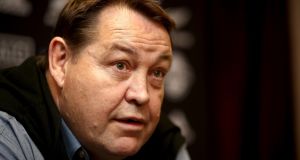 No insider information, not a mention of the “Irish trick” but New Zealand head coach Steve Hansen fully expects Conor Murray to start for Ireland next Saturday at the Aviva stadium.

“I’m assuming Conor Murray will play,” said Hansen unprompted not two minutes into the All Blacks media briefing in their temporary home at the Crowne Plaza in Blanchardstown (the Republic of Ireland squad took their preferred Castleknock hotel accommodation). “So they have a good spine. Murray and Sexton are two of the best players in the world, they drive you around the park good.”

The concern about Murray’s neck injury, having not played any rugby since the third Test in Australia last June, is mentioned.

Following the 28-17 defeat of Argentina, Ireland coach Joe Schmidt stated he would speak to Murray but the final decision to face New Zealand would rest with the 29-year-old.

“It’s not the injury,” Schmidt clarified. “It’s really how ready Conor is and how fully fit he is. It is tough to throw him into a game of this magnitude, so it’s highly unlikely that he will be involved.”

Hansen’s clear opinion – he was almost daring Murray to return – was in stark contrast to Schmidt’s cautious view but the 59-year-old remains convinced about Murray’s return.

“No, I just think he’ll play. I’m not saying that to stir any trouble,” Hansen smiled. “I just think he’s a real competitor, he’ll want to play. If it was one of our boys they’d put their hand up to play.”

How much damage did Murray do during Ireland’s 2016 victory over New Zealand in Chicago?

“I don’t know if he did it, the damage was done up front. When your tight five dominate, your loose forwards dominate and your halves dominate. The difference is he’s a pretty handy player.”

On advice Hansen might have for Schmidt, who is widely tipped to succeed him as New Zealand coach, he quipped: “If I did have any advice for him I wouldn’t be telling him through the media. If he needs my advice he’ll ask me over a cold beer or cup of coffee. He’s a smart man Joe, he’ll do what’s right for his family. Same as all of us.”

Sonny Bill Williams sustained AC joint damage in the narrow 16-15 victory over England at Twickenham and while Hansen expects the former Rugby League giant to recover for the final match of their tour in Italy, Ngani Laumape is joining the panel.

“There’s a pretty good chance [SBW] will be all right but Ngani is coming over. Everyone else is okay so we have a full deck to pick from.”

That indicates a centre pairing of Ryan Crotty and Jack Goodhue for next week's encounter.

The battle lines between these two sides are clearly drawn since the violent encounter at the Aviva stadium in November 2016.

“Without being disrespectful to Argentina, I think we are a better team than them and I know Ireland will be a better team when they play us because everyone seems to find another 10 per cent because it is a good story if you beat the All Blacks.”

What do the world champions particularly admire about the team ranked number two in the world?

“They win, there is a lot to like about that. They have built a game that suits them and they have player depth. O’Brien goes off yesterday and Leavy comes on and plays just as good.

“The last few against Ireland have been really good Test matches – we won after the bell in 2013, Chicago they won and we had to really work hard the next time.

“There is a fierce rivalry there. Both packs will want to dominate.”

1 Reality Bites – Tales from the new normal: Caitríona Cormican
2 Nicholas Quinn: ‘Swimming became how I dealt with grief’
3 James McClean still failing to learn his own online history lesson
4 Ian McKinley: ‘You do take for granted the simple things in life’
5 A beautiful, happy accident - Moneyball is the best sports movie ever
Real news has value SUBSCRIBE