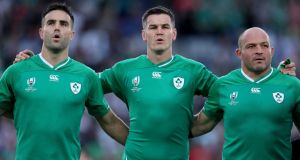 Conor Murray and Johnny Sexton will start and Ireland Test together for the 55th time against Samoa, equalling the halfback pairing of Ronan O’Gara and Peter Stringer. Photograph: Dan Sheridan/Inpho

As Typhoon Hagibis already begins to wreak havoc on the final weekend of the pool stages before doing so on Tokyo itself, Ireland’s game against Samoa on Saturday in Fukuoka (kick-off 7.45pm/11.45m Irish time) is set to go ahead as scheduled.

Fukuoka is in the southwest of the country and well away from the areas set to be affected.

With the England v France and New Zealand v Italy matches already cancelled, doubts about the Japan v Scotland Pool A match going ahead on Sunday in Yokohama remain in doubt. Within minutes of the World Rugby announcement, the Scottish RFU expressed its desire that their game go ahead.

A cancellation and a 0-0 draw would result in two points apiece, which would ensure Japan top the pool, and unless Ireland emerge with nothing from their clash with Samoa, also effectively eliminate Scotland.

“It’s not something we can control,” said Joe Schmidt on confirming his selection to play Samoa. “I only know what we need to do which is to get a result against Samoa.

“It’s not a situation anyone would have wanted. I know there will already be a few massively disappointed teams whose final games in this World Cup have been abandoned.

“There will be many supporters who will be disappointed and some players who were looking forward to playing their last test this weekend and there’s no bigger game that a World Cup match against some of the best players in the world. From their perspective, that’s disappointing but we can only control what we do.”

In his team announcement, Schmidt confirmed that Conor Murray and Johnny Sexton will equal the Peter Stringer-Ronan O’Gara combination as the most prolific halfback partnership in the history of Irish rugby when they start their 55th Test together against Samoa in the Fukuoka Stadium.

It is also a measure of Joe Schmidt’s respect for Samoa, and the heightened importance of Ireland’s Pool A finale against the Pacific Islanders, that Murray and Sexton are among 11 changes to the side which started against Russia.

In doing so, the Irish head coach has reinstated all but one of the pack which started the 27-3 opening win over Scotland, with the tight five of Cian Healy, Rory Best, Tadhg Furlong, Iain Henderson and James Ryan restored.

Josh van der Flier and the redoubtable CJ Stander, who will be starting his third game after also playing the last 53 minutes off the bench against Russia, also return. The exception is Peter O’Mahony, whose workload is being managed ahead of a possible quarter-final a week later.

Murray and Sexton are also reunited for their 57th Test start together, including two for the Lions, as are the old Connacht pairing of Bundee Aki and Robbie Henshaw who, as expected, makes his belated tournament debut after recovering from his tweaked hamstring.

Jacob Stockdale is also recalled, with Keith Earls shifting across to the right wing in his third successive start. It transpires that Rob Kearney was also managed in training in the early part of the week so Jordan Larmour, having started against Scotland before playing off the bench in the last two games, returns at fullback.

Murray is the only survivor from the starting XV when the Irish Under-20s lost a seventh place playoff in the 2009 World Junior Championships against Samoa in the same Fukuoka Stadium by 9-3 a decade ago. The Samoans don’t have any survivors.

To all intents and purposes, this looks like a first-choice side save for O’Mahony, Kearney and Garry Ringrose, who was due a rest after being the only Irish player to have played all 240 minutes thus far.

All told, a dozen of the starting XV which began the tournament so strongly against Scotland in Yokohama have been named, the only exceptions being Tadhg Beirne, Henshaw and Earls.

It was the performance of the forwards especially which laid the foundations for the win over Scotland, as three of the tight five finished off tries which, for the most part, rewarded the work of the pack. They also had a 100 per cent return at both scrums and lineouts although, admittedly, it was the same pack whose set-piece wobbles contributed to the tide ebbing toward the Brave Blossoms in the defeat by the hosts.

That was in extremely humid conditions after a six-day turnaround, and clearly Schmidt, Simon Easterby and Greg Feek believe the performance against Scotland was a more truthful reflection of this pack’s capabilities.

And behind them they have Murray and Sexton. They are now the second most prolific halfback pairing in the history of Test rugby, with only the famed World Cup-winning Wallabies’ halfback combination of George Gregan and Stephen Larkham ahead of them. Admittedly, on 78 Tests together, they are virtually out of sight.

Still, who’d have thought the Stringer-O’Gara partnership would ever have been eclipsed, and if Murray and Sexton start together again in a possible quarter-final, they will overtake the Munster pairing’s tally of 55 Tests together for Ireland.

The first time Murray and Sexton were paired together was in the World Cup pool win over the USA on a wet night in New Plymouth in 2011, but they weren’t selected together again as a ‘9/10’ until the following Six Nations opener against Wales at the Aviva, a 23-21 defeat.

Famously, they have both subsequently admitted that their dynamic friendship off the pitch and understanding on it was initially something that needed to be worked on rather than it coming naturally.

Ronan O’Gara once revealed that Murray and Sexton “had no chemistry at all” when they first played together, and at first Schmidt had a preference for Eoin Reddan at scrumhalf. In his diary of the 2012-13 season, Becoming a Lion, Sexton recalled being asked during the 2012 November internationals if he was happier playing with Eoin Reddan, with whom he was good friends.

“What do you say?” wrote Sexton. “I couldn’t bullshit on about what a brilliant understanding I have built up with Conor because that’s simply not true.”

O’Gara also spoke of their two characters being polar opposites, likening Murray to Roger Federer in his chilled, naturally talented way, and Sexton to this driven, competitive, and more vocal character.

“I think it’s good, because you need a balance there as well. We get on great. We’re proper mates now,” Murray told The Irish Times last February, while admitting they weren’t initially.

Their second Test was a 42-10 home win over Italy, followed by a 17-all, rescheduled draw away to France. In their first 12 Tests as a starting partnership, Ireland won just four games. In the next dozen they won 10. On Saturday, they will be seeking to make it 18 wins out of their last 20 Tests together.