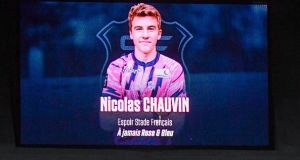 At first glance they could be any French family: a father and his 17-year-old son sitting together in their living room watching the Rugby World Cup on television. So far their favourite match has been Japan’s gripping win over Ireland, not least for the Brave Blossoms’ esprit de corps and positivity. If Philippe Chauvin’s middle son, Nicolas, had still been alive they felt he would have loved it, too.

It is almost 10 months now since Nicolas, aged 18, died while playing for Stade Français Espoirs against their counterparts from Bordeaux-Bègles. Rugby was his passion from the moment he first picked up a ball at his local club just east of Paris in 2005. Tragically, the young flanker’s choice of sport cost him his life.

A double tackle fractured a cervical vertebra and he subsequently suffered a heart attack and brain damage. He underwent emergency surgery but died three days later.

Not everyone, in the wake of such a grievous loss, would have the emotional resilience to tune into this World Cup. Philippe Chauvin, however, is a remarkable – and increasingly driven – man. Having played rugby himself for 25 years, he wants Nicolas’s death to galvanise the game’s authorities, in France and worldwide. At the end of last month he announced his intention to launch a manslaughter lawsuit aimed at uncovering the full facts behind his son’s death.

Chauvin, who works for the French national rail company SNCF, feels he owes it to Nicolas to check out every available avenue. Under French law, with the police investigation now closed, he is not allowed access to the file relating to his son’s death unless he goes down the legal route. “Losing a child is terrible, even more so because of a problem that could have been avoided. I’m going ahead with this complaint because I do not want it to happen to others.

“I feel it is also my duty to Nicolas to do everything so that the facts and responsibilities are established. By filing a complaint, I will have access to the file. There may be things that I do not know or positions that are not the ones I was told.”

He would like to establish whether the French Rugby Federation or anyone else involved on the day was negligent in any way. “A federation has an obligation to ensure the safety of its practitioners. I do not believe that a shoulder shot to the head launched at 20 km/h preserves safety. I just want someone to explain to me why the security of a player could not be assured and if and where mistakes were made.”

Calm and measured, Chauvin could just be the catalyst for significant change, with four young players having died in French rugby between May 2018 and January this year. The upper age limit for players representing the Espoirs has already been reduced by a year to 22, aiming to reduce the ‘men against boys’ element when young junior-club hopefuls like Nicolas start colliding with intensively conditioned professionals. Below-the-waist-only tackles and a ban on double tackles are being tried out at junior level, albeit with mixed initial results.

The Chauvin family, though, believe it is people’s attitudes that most need recalibrating. “Rugby is not a game of destruction, we must not play to wipe out an opponent. The spirit of the game is to keep the ball alive, not to kill your opposite number.”

While Philippe instinctively remains a rugby man – “I used to watch the games with Nicolas. It’s part of our life. I do not wish to attack rugby” – he does not want other parents to suffer as he and his wife have done.

In particular, he argues the sport cannot continue to permit the type of fierce upper-body shot that fractured Nicolas’s second vertebra – an injury more consistent with car crash victims. “We must stop looking for excuses when an offence is committed. Rugby is a beautiful sport in terms of its values and shared commitment but if the game is not controlled and safety is not assured, young people will go to another sport. It should not be a sport for bullies or brutes but a sport of possibilities, in which teams have to combine strength, speed, agility, intelligence and will.”

The past 10 months have also shown him and his two other rugby-playing sons – the eldest is 20 – that not everyone takes full responsibility for their actions. “I have discovered that some within the sport are not prepared to face the reality of fatal accidents. I was very surprised given it is a professional sport. In business a fatal accident is the responsibility of the employer and investigations are conducted to establish the circumstances. The facts are examined against clear safety rules. I feel more apprehension for the players now and am much less tolerant of reckless play. I now know it can be fatal, that there is no second chance if the limits are crossed.”

There are few things more affecting than a grieving parent’s cry from the heart. Philippe Chauvin is looking forward to France’s game against England on Saturday but his dearest wish is that Nicolas’s story resonates far beyond this World Cup. “I don’t want him to leave a legacy, he just deserves the people of rugby to be aware of the truth.” The entire rugby world should heed his powerful message.

1 Cam Newton broke the mould: Can his flame be rekindled at the Patriots?
2 Pete Sampras: The forgotten great with the best serve in the business
3 UK Sport to investigate ‘deeply troubling’ gymnastics abuse allegations
4 Tipping Point: DeChambeau’s transformation raises questions, but who will ask them?
5 Tuilagi case shows England’s home-based clause is out of date
Real news has value SUBSCRIBE