England in fine fettle as quarter-final clash with France looms 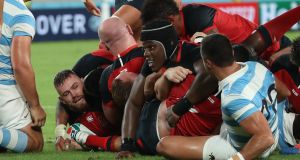 England’s Luke Cowan-Dickie scores a try during the Group C victory over Argentina at at Tokyo Stadium. Photograph: David Rogers/Getty

England limber up for a shuddering confrontation with France having already qualified for the quarter-finals by crushing Argentina on a fizzing Saturday evening encounter in Tokyo city.

The sense of possibility gradually left this game after Tomas Lavanini was red carded for a high tackle which saw England’s Owen Farrell clattered for the second successive game.

Lavanini looked resigned to his fate, gone after just 19 minutes when referee Nigel Owens reviewed the play. There was some mild surprise that Farrell didn’t leave the field for a head injury assessment. He went on to miss four first-half place kicks in a row and it was natural to wonder if he was feeling the effects of the hit.

“I feel fine,” he said afterwards.

“It wasn’t concussion and that was the worry but I didn’t get hit on the top of the head. Your jaw gets a bit sore but there’s no need for a HIA.”

It was another game in which the high tackle had ruinous consequences for the transgressors. A low oomph went around the stadium when Farrell hit the grass. Owens allowed the sequence to play itself out but when he reviewed the tackle on the big screen, the Argentinian’s fate was clear.

Lavanini is 6ft 5in and Farrell had crouched low as he braced himself for the hit Still, Owens told the big man he had led with the shoulder and not done enough to ensure the safety of England’s playmaker. He was gone. Argentina’s towering task in this group had just been raised to the point of impossibility.

Eddie Jones remained impassive but he must have been relieved. Throughout the opening quarter, England had been locked into a grim and fascinating arm wrestle with their old enemies and in the stands, the charioteers drank their beer and were very, very quiet.

It was tasty from the go, with a brief rumble developing after England’s imposing packed pushed Argentina off their scrum. Owens, like a teacher who knew this class could quickly turn mutinous, issued stern warnings.

There was outrage in the stadium when Manu Tuilagi was penalised for tackling Emiliano Boffelli when the fullback was still in the air but the Welshman decided a penalty was enough.

So on the half hour mark, as Tokyo drifted towards Saturday night frenzy, the scoreboard lingered at 5-3, with England’s try one of the easiest finishes Jonny may will ever enjoy in his life.

But with Farrell missing the conversion and Mario Ladesma’s side stalling their momentum with a series of terrific tackles filled with power and intent, this was not a first half hour in which England advanced their credentials.

Instead, it was the Pumas, down a man who filled the suburb with their singing. Another problem for Jones was the sight of Billy Vunipola, their dump-truck of a number eight, receiving heavy dressing on his ankle. England loosened up after George Ford scored their bonus point try early in the second half and celebrated with a primal scream of relief.

“I’m not sure to be honest,” Ford said of what went through his mind then.

“It’s one of those moments where you don’t know what you’re doing. We wanted to start the second half really well and getting those ten points early in the second half was huge. It was a big moment in the game and that was reflected in the way we celebrated it.”

The second half didn’t quite become the anticipated England landslide. Their travelling support could sit back to savour the phenomenal driving power that Manu Tuilagi brings to England’s expansive moves while their big, bullying pack went to town on Argentina’s weakened unit. Sam Underhill was at the coalface of England’s power plays.

Already, England’s World Cup is a dramatic improvement on their dismal experience at home four years ago. Argentina’s 14 men fought with feverish pride until the end but fatigue as much as anything saw them cough up late tries to replacements Jack Nowell and Luke Cowan-Dickie. An air of antagonism hung in the heavy warmth, with a row breaking out behind the posts in the 80th minute.

“It is not something we want to get caught up in but we will look after our players and that is what we tried to do today.”