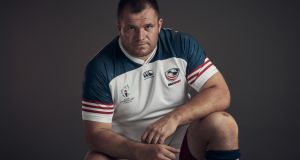 Paul Mullen of the United States: ‘If you told me that NBA players would know of the rugby team eight years ago, I wouldn’t have believed it. To me, that says a lot.’ Photograph: Adam Pretty/World Rugby via Getty Images

On Monday, the Houston Rockets basketball team breezed into Tokyo as part of the NBA’S barnstorming tour of Asia, a market of unfathomable riches. Several members of the USA rugby team took a train down from Kumagaya for an arranged meeting with James Harden and company. Paul Mullen wasn’t able to go along but he’d have liked to. He’s a Houston local now, by way, of course, of the Aran Islands, and the meeting of the two squads feels to him like an indication that American rugby is travelling in the right direction.

“Massively so,” he says over a phone call from his team hotel, where the USA are in final preparations for Wednesday’s game against Argentina.

“The first rugby game I went to in 2011 was a six-hour drive, played the game and then a drive back. With the introduction of the MLR [Major League Rugby] in 2017, everything has changed. I think they have 11 teams next year and the game is getting more and more exposure. So, like, the Rockets players were aware of the rugby team and following the team’s games here in Japan. If you told me that NBA players would know of the rugby team eight years ago, I wouldn’t have believed it. To me, that says a lot.”

Few rugby players have had such an unconventional or single-minded route to this World Cup as Mullen. He has made appearances off the bench in both the England and France games. It was 12-6 when Mullen went in as a replacement in the French game; a penalty from AJ MacGinty, who has had a phenomenal tournament, made it 12-9. The game teetered on the edge of a shock.

“From the bench point of view, just before I came in, we could see that this was there for us. I think then we got a penalty just outside the 22 and you are thinking, wow, we are right behind them here. But it took a turn and it began to slide on us. Sometimes when a team like France build a few phases, they can be hard to stop. And they got a run on us.”

For Mullen, the difference in scrum performance at the elite level is simple.

“There is just no room for error. If you mistake at this level, you are going to get absolutely demolished. At a lower level you might be able to get yourself out of it somehow. A scrum penalty can really cost the team in terms of momentum swing in the game as well.”

With Argentina’s aspirations quenched against England last Saturday, the USA team are looking to close out their experience, optimistic of a win against Argentina or Tonga on Sunday.

I liked Gaelic football but always felt it missed a bit of physicality. So when I found the game at Glenstal, I loved it

For the Galway man, the tournament marks his arrival in elite company. His parents managed to fly out for the first two games before scooting back to the Aran Islands for the end of the tourist season. They run a cycle shop near the harbour. After a very localised childhood, Mullen hasn’t really stopped moving for the last 15 years. Rugby has been the primary cause. He admits that before he went to boarding school at Glenstal Abbey, rugby didn’t really exist for him.

“There wasn’t a huge amount of interest. On the Aran Islands, Gaelic football was everything. We don’t hurl. We’ve a bit of handball now. We would watch Galway playing football. And rugby . . . just wasn’t on the radar. You didn’t think about it. So my first exposure was in Glenstal. A lot of us there didn’t. You are given a ball and told to run and tackle as hard as you can. I liked Gaelic football but always felt it missed a bit of physicality. So when I found the game at Glenstal, I loved it. I don’t know . . . I was thrown in and really didn’t leave it.”

He was captivated, even more so after he began attending Munster games at Thomond. A different future opened up. He pushed himself to excel, sometimes catching the ferry from home and a bus to Limerick and staying overnight to make summer training sessions for Munster underage squads. His parents were supportive but insisted he steer his energies towards the books as well. He had just returned from a Munster U-19s training weekend in England when they sat him down in the kitchen on the island to tell him they didn’t think he was applying himself academically. He would spend the next year at school at The King’s Hospital.

“That was tough. I had spent all summer training with Munster. I just got back off the ferry after a training weekend in England. They sat me down and said we feel you aren’t studying enough. And now I am going to a Leinster school. Were they right? Hard as it was to agree with them at the time, they probably were. I was in love with rugby and it was more important than the studies. And they weren’t really sending me to Glenstal to play rugby.”

Faced with the crossroads choice of professional rugby, his folks persuaded him to get a third level qualification first. “They said to me that the rugby career was always just one injury from being over.” He ended up heading to Texas A&M. “I think I met one Irish person in the first year.”

Finding rugby was an ordeal at first, involving those stupendously lengthy journeys. But he persevered and has benefited hugely from the foundation of Major League Rugby. His brother Eoin, a professional track cyclist, is also moving around the States; they crossed paths for the first time in three years when they were both training near Colorado Springs for a few days prior to the World Cup.

“On the island, cycling is just a form of transport. But out of all of us Eoin really took to the bike. So yeah, finally bumped into him there and it was brilliant just to chat with him.”

The boys were just saying: we’ve a week left here to really give it a shot and win the next two games

He’s not sure to what extent his exploits with the USA will register around Kilronan. But he was last in Galway just after Ireland had beaten the All Blacks and he noticed just how prominent Connacht had become. It felt to him as if the profile of the game had shifted dramatically in his old neighbourhood. He is hopeful that it will continue to go the same way in the USA.

He’s savouring every moment of his Japan adventure. Last weekend, a few of them ventured into Shibuya, which has the busiest zebra crossing on the planet. “It’s a long way from home,” he laughs. “We headed around the markets and it was great. I was happy to get out of the hotel and have a look. Those bullet trains, man – and the toilet seats over here – are both quite exceptional,” he laughs.

“But you know, we got together back in June. And the boys were just saying: we’ve a week left here to really give it a shot and win the next two games. So from so long together, we have a week to make a statement. It’s a bit shocking in a way. The time has flown by.”