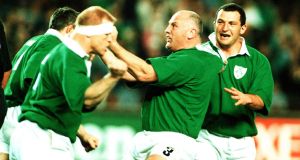 Whatever about this featuring in Ireland’s standout World Cup moments, the fact that it is also included on one particular New Zealand rugby website as a Top 10 memory from tournaments past encapsulates the impact of Gary Halpin’s try-scoring celebration.

Gerry Murphy’s Ireland team had the temerity to score the first try of the match in 1995, a move straight from the training ground as scrumhalf Michael Bradley tapped a free-kick and gave it to the onrushing Halpin about six metres from the New Zealand line. The tighthead prop thundered through the attempted tackles of Jamie Joseph and Mike Brewer to crash over.

On being hauled to his feet by teammates and in the process of running back to his half, he spun around and offered a double middle finger salute to his opponents. Ireland team manager Noel Murphy took the player to task for the gesture in the dressing room afterwards.

In an interview many years later, Halpin offered some context to his reaction. “(New Zealander hooker) Sean Fitzpatrick had been winding us up, calling us Paddies. And I couldn’t really believe I’d actually scored a try.

“It was a rather stupid thing to do, being a teacher and all. And it’s kind of embarrassing because I’ve gone on to meet a lot of those All Blacks since, Zinzan Brooke from my time at Harlequins, his brother Robin, and Jamie Joseph.

“But I dined out on it like a lord. That was when I discovered that South Africans hated the Kiwis more than anyone. I loved telling the story; you’d embellish it a bit every time, just to get bought another beer.”

Ireland went on to lose the game 43-19 with a 20-year-old Jonah Lomu crossing for a brace of tries while centre Frank Bunce, wing Glen Osbourne and flanker Josh Kronfeld also crossed the Irish line. David Corkery scored Ireland’s other try on a day when Ireland’s rugby anthem, Ireland’s Call, was played for the first time ahead of a test match.

Halpin was a dual international sportsman, playing schools rugby for Ireland while at Rockwell College, before accepting a scholarship to the University of Manhattan. He won the American Indoor Collegiate Championship in the hammer and represented Ireland in the 1987 World Athletics Championship.

Upon returning to Ireland in 1989, he joined Wanderers, toured North America with the Irish senior squad, and the following year made his debut against England at Twickenham. He won his 11th and final cap of a five-year international career in a 1995 World Cup quarter-final defeat to France.

He spent two decades teaching in England at St George’s College, Weybridge and the Oratory School outside Reading. His pupils were intrigued to know that Halpin featured in Jonah Lomu Rugby, Playstation’s first ever rugby game. He admitted: “Interestingly, and the kids have showed this to me, one of the hardest things in the game is to try and get me to score a try. They’ve had various competitions to try and get me over the line. If they manage it, and they had the proof on replay, I gave them a present.”

Halpin subsequently returned to Ireland to take up a position as Head of Boarding at Cistercian College.

Pete Sampras: The forgotten great with the best serve in the business 11:10
Simmons: England West Indies series a blueprint for cricket 10:17
Different Strokes: Frankie leaves Fleetwood for Hollywood 10:00
Dan Carter to return to Christchurch as an Auckland Blues player 08:08
Ralf Rangnick named new Milan boss for 2020-21 07:54
Crossword Get access to over 6,000 interactive crosswords