Teams have a duty of care to their opponents, and must expect sanction for dangerous play 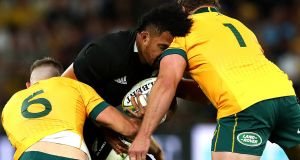 Ardie Savea of the All Blacks is tackled during Saturday’s Tri-Nations match between the Wallabies and New Zealand in Brisbane. Photograph: Jono Searle/Getty Images

There was marvellous action in Saturday’s Bledisloe Cup match, when Australia overturned New Zealand, and redeemed themselves following their record defeat at the hands of the All Blacks the previous week. If the rugby coming up in the Autumn Nations Cup is half as good, we will be well served.

Sadly, however, the post-match discussion has focused much more on the two red cards – one to each team – which referee Nic Berry quite rightly dished out.

The two incidents were very similar: first, Efa Tu’ungafasi (122kg) drove hard into the head of Oz’s Tom Wright; next, in a carbon copy of that, Lachie Swinton (112kg) charged into Sam Whitlock, and both teams were playing with 14.

The animated outcry after the match by former All Blacks players Christian Cullen and John Kirwan dominated discussions. Cullen: “Seriously, they are not red cards.” That is, frankly, a preposterous statement – the referee followed the law and protocols exactly as he should have. So please, don’t shoot the messenger.

These commentators (have we ever seen a better fullback and wing?) did little service to the game on this occasion.

Another point made is that the spectacle is ruined by red cards, and that they should be taken out of the game. In neither case was the opponent injured and did not receive medical attention – but that is purely a matter of good fortune and cannot be part of the argument.

Red cards cannot be based on the level of injury which does or doesn’t occur.

When I watched these incidents I thought, have these players learned nothing? Do they not know the tackle laws and protocols, or can they just not resist getting in a “hit”?

Former Australian players Phil Kearns and Tim Horan also have sided with Cullen and Kirwan, while Wallabies coach Dave Rennie and captain Michael Hooper have been quoted as accepting their card.

The suggestion that, instead of red, players would get a yellow card and be put “on report” to be dealt with later holds no water at all. Just for starters, it would mean a player guilty of dangerous foul play would be treated during the match the same way as a player who deliberately knocked on the ball.

In his new World Rugby role, Joe Schmidt has put an expert group in place, and this includes many of the current leading coaches. I am certain that they will be asked to address this issue and, yes, the issue of affecting the spectacle of the game can be true, particularly when a player receives a red in the early part of the game. So, where is the solution? It is a very vexed question and if there is an answer it will not be easy to find.

It’d be nice to know who, in the WR group, goes with the Cullen view, and who doesn’t. I’ll bet it won’t be unanimous.

The arguments defending Owen Farrell were that he got his technique wrong. Well, that’s been happening for far too long now, and far too often.

For me, rugby is a team sport and if one member of the team gets himself sent off, then it has always been accepted that the team suffers by playing with one man less.

This has had the effect of most players behaving with some sort of care towards their opponents, although at the professional end that is hard to see. The future participation of young schoolboy players, and thus the future of the game, depends on respect and care for your opponent. That duty of care is also a legally established requirement.

When dangerous play causes serious injury the consequences for the injured player can be devastating, and frightening to watch.

You can find on YouTube the shocking tackle, in September, by Owen Farrell (yes, again) on Wasps 18-year-old, and just out of school, Charlie Atkinson. It could have been much worse, but Atkinson was knocked into oblivion. Completely unconscious for quite some time. Farrell was, and I believe him, full of remorse, and knew that his action deserved a red card. No one can persuade me that 10 minutes in the “bin”, and a hearing later, would be a punishment befitting the crime.

The arguments defending Farrell were that he got his technique wrong. Well, that’s been happening for far too long now, and far too often. He is a long-standing England and Lions player, so the “technique” excuse is well worn through by now.

The judicial panel found it to be a “top end” offence which has an entry point of 10 weeks’ suspension. The range is 10 weeks to 52 weeks. So, he was duly suspended for 10 weeks, which was reduced to five, giving him plenty of time to prepare to lead England to the Six Nations Championship in Rome. Was a net five weeks really enough, and what does a player have to do to get more than the entry point?

The reasons for the reduction were testimonials from Eddie Jones and Mark McCall, and charity work by Farrell. I leave you to decide on the merits of those, particularly the first two mentioned.

The rugby judiciary needs to review its systems, and reasons for sentence mitigation. Once a player is polite at the hearing and says “sorry”, is he going to get 50 per cent reduction?

Let’s all fervently hope that our impending post-match chats will be about the terrific rugby we have watched, and not about foul play and red cards. Players and coaches have a responsibility.