Pro14: Ulster look to keep a grip on their unbeaten start 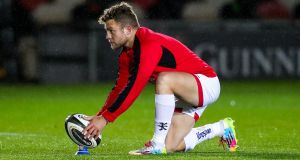 Ian Madigan during the warm-up to the Pro14 match against Cardiff Blues at Cardiff Arms Park in Wales on November 2nd. Photograph: Rogan Thompson/Inpho

Dan McFarland has made eight changes to the team that beat the Cardiff Blues as Ulster look to maintain their unbeaten start to the Guinness Pro14.

Matt Faddes comes on the left wing; Luke Marshall – who came off the bench last week after a long-term injury – is named at outside centre, with Stewart Moore shifting in one place. Billy Burns’s call-up to the Ireland squad sees Ian Madigan start at outhalf.

There are five changes to the pack, Jack McGrath, John Andrew, Sam Carter – he captains the team – Sean Reidy and Marcell Coetzee promoted to the run-on team. Eric O’Sullivan will make his 50th appearance for Ulster off the bench, one that includes Marcus Rea; his older brother Matty reached that milestone last weekend.

Glasgow Warriors head coach Danny Wilson has also made swingeing changes to the team beaten by Leinster at Scotstoun last time out, several enforced as players were recalled to the Scotland squad ahead of the Autumn Nations Cup.

He explained: “With our internationals staying with Scotland we have had to make a number of changes across the park. [This game] is a massive opportunity for a lot of our young guys to step up and show what they can do. We’re putting out a young, fast, energetic squad onto the park and we’re excited to see what this team will produce. We know they are going to show up and give their all for the jersey.”

Ulster demonstrated a gritty resilience to outlast Cardiff last week but will be hoping for a more fluent attacking performance to continue an excellent start to the campaign.

Yan Bingtao becomes youngest Masters champion in 26 years 07:01
Liverpool’s attack struggling without Van Dijk; Yan Bingtao wins Masters title 06:51
‘I realised the book had helped people and that has been part of the healing’ 06:15
Ken Early: Liverpool have crumbled without Virgil van Dijk 08:27
To let the Games begin, or not: Three Irish athletes give their thoughts on the Tokyo Olympics 06:00
Here is your handy guide to sport on television this week