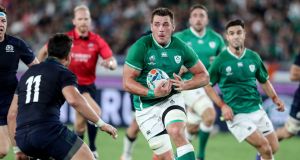 There was much to admire in Ireland’s hard-nosed and ruthlessly emphatic 27-3 victory over Scotland, not least the vindication of the team selection, the work at the set piece and the manner in which Ireland physically dominated their opponents on the gainline, the breakdown and for the most part in the tackle too.

CJ Stander was awarded the man-of-the-match accolade, recognising a fine performance that was reminiscent of his most effective games for Ireland. Ireland head coach Joe Schmidt and his coaching team deserve credit for the way in which they set-up the team, devised a gameplan and watched as the players largely implemented it.

Scotland were poor, rudderless and lateral for the most part, and when their attack was stymied resorted to kicking away possession. There was a disconnect that was not completely attributable to their opponents’ general superiority. It should worry Gregor Townsend.

Iain Henderson called the lineout beautifully, Jordan Larmour discharged his duties at fullback very capably on the ground and in the air, while the team absorbed early injuries to Bundee Aki and Peter O’Mahony without missing a beat. Chris Farrell and Jack Conan slotted in to good effect with Stander playing all three backrow positions during the match.

An area of pre-match concern in some quarters after the frailty of Twickenham, Henderson’s calling and captain Rory Best’s throwing were nicely in sync as Ireland won all 12 throws, not all perfectly but with enough control to retain possession. Much of the work though out of touch was excellent, allowing Ireland to set up a very effective maul that led directly to Best’s try.

The Irish captain belied his 37 years and showed tremendous fight to ground the ball. James Ryan, excellent once again, took responsibility after Henderson’s departure. Three tries from front-five players in the pack was an appropriate reward for an Ireland eight that dominated their opponents, an ascendancy that remained even after wholesale changes to both sides.

Ireland won two penalties and a free kick at scrum time, another area in which they were thoroughly dominant, both in attack when Stander surged off the back in the build-up to Tadhg Furlong’s try and in getting Conan powering into the Scottish midfield defence.

The line-speed in defence was impressive, highlighted in a couple of superbly timed tackles by Jacob Stockdale and Garry Ringrose that emphatically shut down chances on a couple of occasions when Scotland might have got to the edges. Shooting out of the line in defence, requires excellent timing, a buy-in from team-mates and good communication.

There were other examples too. Ireland managed to turn Scotland back inside where they were chaperoned effectively, usually in double tackles and also shut down the inside pass. Finn Russell’s kicking and passing game was bankrupt long before the finish.

The humidity and torrential rain in the second half made handling very difficult but it still doesn’t fully explain some carelessness from an Irish perspective. Andrew Conway, Conor Murray and Stockdale all spilled possession, technical errors rather than an issue with a wet ball. It is a minor cavil but one that needs a little polishing.

Ireland’s kicking game was a mixed bag. Leaving aside the place-kicks, some of Murray’s box-kicking drifted a little too far and was therefore not fit for the purpose of contesting possession. He also put several on a sixpence, not least in the preamble to Conway’s try; the winger winning the tap, Larmour snaffling the ball and Murray showing great appreciation in finding both the space and his winger.

The Irish scrumhalf looked very sharp in most aspects of the game and could reasonably have picked up a couple of tries with some excellent support lines had Stockdale and Stander heard his calls in the maelstrom.

Wayne Barnes performance wasn’t flawless – that’s an impossibility in refereeing a rugby match – but it was arguably the most consistent and sympathetic of an opening weekend when the officiating has left a great deal to be desired.

Barnes communicated with the players and his cadence at scrum time meant that both scrums fully understood what he expected. Both teams would have a gripe or two but that’s a given in every match.

In terms of the tournament in general World Rugby and their head of referees Alain Rolland spoke beforehand about the need to protect players and yet, three match officials, a TMO with the use of Hawkeye managed not to spot two nailed-on red cards.

Japan secondrow James Moore and Australian wing Reece Hodge both connecting with head-high shots, the recipients of which both required HIAs. It could have had a huge bearing on the outcome of the matches because Russia and Fiji were in the ascendancy when the incidents occurred that should have reduced their opponents to 14 players permanently.

The offside line has been nonexistent at times throughout the opening weekend and it really does beg the question of what the assistant referees are watching. Inconsistencies in the application of the laws at the breakdown, and the number of transgressions across virtually all the matches to date was baffling.

Angus Gardner’s interpretation of what was going on in the scrum in France’s narrow victory over Argentina was perplexing but Nigel Owens, Jerome Garces and Ben O’Keefe might not enjoy their reviews too much either.

The problem for teams will be a kneejerk reaction by officials to the legitimate criticism and what that might entail going forward for players. The talk before the tournament has not been borne out by actions.

Japan, France and New Zealand demonstrated how effective it can be while Ireland’s early game ‘hot potato’ routine was a little alarming. There were other opportunities later in the match when an offload or pop pass could have opened up chances of further scores but no doubt spooked by that early inaccuracy, Irish players felt that discretion was the better part of valour.

1 Henshaw the only change as Andy Farrell names Ireland team for Paris
2 Gordon D'Arcy: Ireland must go after victory by frightening France into mistakes
3 Women’s GPA says demands on female GAA players are ‘increasingly unsustainable’
4 Warren Gatland: England players could miss Lions tour if not released for Japan warm-up
5 Cian Healy: ‘Realistically I got away with murder when I was younger’
Real news has value SUBSCRIBE