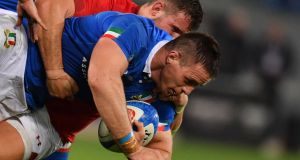 14 Edoardo Padovani (Zebre)
Age: 25
Height: 6’2”
Weight: 100kg (15st 10lbs)
Caps: 17
Padovani, who plies his trade at fullback for Zebre, returned to the Azzurri side for the Wales clash on the wing, scoring late on after a smart finish. Also scored from the bench in Edinburgh.

13 Michele Campagnaro (Wasps)
Age: 25
Height: 6’
Weight: 94kg (14st, 11lbs)
Caps: 40
A talented footballer, Campagnaro played on the wing against Scotland before switching back to a more familiar midfield berth for Wales, where he performed well.

11 Angelo Esposito (Treviso)
Age: 25
Height: 6’2”
Weight: 98kg (15st, 6lbs)
Caps: 17
Some of Italy’s brightest moments have come through Esposito on the wing - the Benetton flyer has an excellent eye for a gap and the pace to match.

9 Tito Tebaldi (Treviso)
Age: 31
Height: 5’11”
Weight: 88kg (13st 10lbs)
Caps: 29
Five years since he last played a Six Nations game but has experience and will expose any holes on the fringes at the breakdown.

1 Andrea Lovotti (Zebre)
Age: 29
Height: 6’
Weight: 113kg (17st, 11lbs)
Caps: 31
Lovotti has recovered from the flu to return at loosehead, after missing the defeat to Wales. Struggled to have much influence a week earlier against Scotland.

3 Simone Ferrari (Treviso)
Age: 24
Height: 6’
Weight: 121kg (19st, 1lbs)
Caps: 19
Ferrari is now a regular starter for the Azzurri, and is making his third appearance of the Championship, after two honest if unspectacular performances thus far.

4 Federico Ruzza (Treviso)
Age: 24
Height: 6’6”
Weight: 108kg (17st)
Caps: 9
Gets his first start in this season’s tournament after twice impressing off the bench. A decent athlete and a good carrier.

5 Dean Budd (Treviso)
Age: 32
Height: 6’4”
Weight: 108kg (17st)
Caps: 18
Treviso captain Budd is another Italian-qualified Kiwi who was given his Test debut by O’Shea in 2017. A good all-rounder in the engine room he’s also a reliable lineout option.

1 Dan Tuohy explains ‘rotten to the core’ comments
2 Six Nations: No place to hide for Ireland’s misfiring captain
3 Lampard warns Chelsea to be fully focused for Bayern test
4 ‘Ireland’s honeymoon period is over’ - buoyant English press reaction
5 All in the Game: how Firmino’s agent made him faster . . . on his laptop
Real news has value SUBSCRIBE