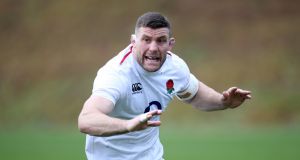 In the beginning, Eddie Jones made it look easy. He had an idea what was wrong with England’s back row, had even explained the problem in a column for the Daily Mail while Stuart Lancaster was still in charge, and he knew a quick fix for it too.

When Jones took over as head coach he moved Chris Robshaw over to the blindside flank, picked James Haskell to play on the openside, and brought back Billy Vunipola, who had been injured, at No 8. Jones knew he needed to bring a young back rower through too, because Robshaw and Haskell were both getting on, so he picked Jack Clifford. Simple.

It worked. Haskell responded well to the stick Jones gave him, Vunipola to the support he offered, and Robshaw just stuck his head down and got on with proving everyone wrong. They started together in seven of England’s next eight Tests. Clifford was on the bench for six of those games too. And England won every one of them.

The trouble is, the three of them have not played together since, and they are not all that likely to again, either. And it is only now that Vunipola is playing with Tom Curry and Mark Wilson that it feels like Jones has found a backrow unit he is happy with.

In between, he has picked 15 players in 21 different backrow combinations in 28 Tests. Some of that inconsistency was caused by injuries, some by the ebbs and flows of form, but it is true, too, that a lot of it was because Jones was casting around for players who could do everything he was asking them to.

Whatever Jones was looking for, he had not found it by spring 2017, and was starting to look a bit desperate. He was playing Maro Itoje at No 6, and had recalled Tom Wood at No 7. A year later, he went full circle, and put Robshaw back on the openside, with Courtney Lawes playing blindside. With Vunipola and Nathan Hughes injured, Sam Simmonds had come in as the new No 8. Lawes, Robshaw, Simmonds, started three Tests together in that year’s Six Nations, which is where things started to go really wrong.

England were beaten 25-13 by a Scottish team that dominated the breakdown, where they won 13 turnovers. Jones’s England now had exactly the same sort of problems that Lancaster’s had been suffering with in 2015. Jones needed another solution.

There was Brad Shields, fresh over from New Zealand, and then the group of four rookie players he had taken on tour to Argentina in 2017: Sam Underhill, Don Armand, Wilson and Curry. Armand did not make the cut. But between the other four, Jones had options.

Curry and Underhill were always seen as coming men. It is the 29-year-old who has been the real revelation. England’s scrum coach, Neil Hatley, describes him as a “glue player”, someone who sticks the team together.

“He has developed massively since his debut in Argentina,” says Hatley, “I think he’s become a more genuine threat as a ball-carrier. Defensively, he’s always been very good and he puts his head over the ball. He’s a poach threat too.”

But you sense it’s not just the skillset Wilson has that appeals to Jones, but his attitude and work ethic. That is true for Curry too.Jones is a relentless coach, and asks a lot of his players, too much for some. But Wilson, Hatley says, is “the sort of bloke you want to work with, and players want to play with him, because of the way he approaches every single day”. – Guardian