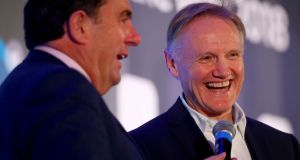 Des Cahill talks to Ireland rugby coach Joe Schmidt after he was named Philips Sports Manager of the Year at an awards ceremony at the InterContinental Hotel in Dublin. Photograph: Tommy Dickson/Inpho

A frisson of excitement cut through the Intercontinental hotel in Dublin on Wednesday afternoon as Joe Schmidt swooped to collect the Philips sports manager of the year award for 2018.

Schmidt had not spoken since announcing, via email in late November, his decision to step away from professional coaching after the 2019 World Cup.

Slightly more clarity on that surprising decision was provided by the 53-year-old as he briefly stalled before “going back to work”.

“For me, there is the older generation and my son [Luke, who suffers from epilepsy] the younger generation that will take up a lot of time in those 12 months post finishing.

“I’m looking forward to that as a different sort of challenge because I don’t get home very often [to New Zealand]. I’m away a lot and in the coming year I’m going to be out of the home for more days than I am in the home.”

The crazy hours all these monthly award winners rack up takes a heavy toll on family life as well as their mental and physical well-being.

Schmidt agreed this factored into his decision to step away from coaching at least for 2020.

“I would say it is difficult not to stay where I am,” he added, when on the subject of rejecting the offer to join the All Blacks in 2017.

“It’s difficult not to keep doing what I am doing with a fantastic group of people. Whatever decision you make you never say never but you’re always trying to be the best you can in a very short term you have left. For me that’s 11 months. I’m not looking any more forward than that.”

Other voices picked up the slack. The monthly winner for May, Leinster coach Leo Cullen, was queried about the deep well of talent being nurtured by the European champions.

“In the past Leinster brought in some foreign players but it is just so competitive to bring them in. The work that goes on around the provinces is just so important. The investment that goes into those guys is huge. There are a lot of good kids coming through. The numbers are improving all the time but there are other competitive sports out there as well.”

New Republic of Ireland under-21 manager Stephen Kenny, who won the October prize for guiding Dundalk to the league and cup double, shed some light on his duties over the next two years, before replacing Mick McCarthy in the senior position, while also doffing his cap to the work happening within Irish rugby.

“My role for the next 20 months is to obviously manage the under-21 national team but also oversee the 19s, 18s, 17s, 16s and 15s so I’ll be working with the various managers and coaches really to develop the next generation of players,” said Kenny.

“A lot of our younger players are in England as well so I’ll be over there but it is to nurture players in this country as well, from all the ages.

“We seen Leo speak earlier on about the production line into the Irish international team in rugby, which has been incredible, but in recent years . . . when you think of Robbie Keane, Damien Duff, John O’Shea, Shay Given, Richard Dunne all together in one team, we don’t’ have that anymore. We don’t have players coming through in the top clubs in the UK anymore, because it’s a global game football, it’s international, players from every nationality in [English] academies, so we have to develop our own players and push them through to our international team.”

The funniest (printable) line of the day went to Kiely. On The Late Late Show recently the Limerick manager was introduced to Limerick’s oldest supporter, 98-year-old John Hunt, who emigrated to America “two lifetimes ago”.

“He’s still going strong,” said Kiely. “He’d been to the finals in the 1930s . . . .His life story is incredible. I actually got to meet him when we went to Chicago a couple of weeks ago. He is hale and hearty. We gave him the sliotar, one of the match balls from the game – much to my wife’s dissatisfaction as there was only one in our house! But we gave him the ball. When I met him in Chicago I was interested if he brought the ball back from Ireland. He said it was up on top of his mantelpiece with two loaded colt 45s beside it. Nobody was going to take that sliotar.”