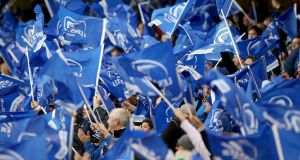 Leinster fans will be unable to watch both their team and Munster live this weekend. Photograph: Bryan Keane/Inpho

In the 24 seasons of the Heineken Champions Cup, Leinster and Munster have been ever-presents, the latter playing 169 matches in the competition and the holders 162 times.

Yet for the first time ever they will kick off simultaneously this weekend, hence denying Irish rugby supporters the opportunity to seen each of the matches live and in full.

This is largely due to a confluence of events when the schedules were devised and agreed amongst the respective television companies with primary broadcast rights to the tournament last summer.

In other words, once BT and both beIN Sports and France TV had divvied up the round four matches to suit their needs, the two Irish teams were destined to clash.

So it is that in every round of the pool stages BT have screened or will screen live matches involving Premiership clubs in each of those slots.

The only exception was in the final Sunday slot in round two when the two games at 3.15pm were Cardiff v Glasgow and Toulouse v Leinster.

This Saturday, as in every other Saturday in the pool stages, BT will show games involving English clubs in each of the three slots, with Saracens away to Cardiff at 1pm, Wasps away to Toulouse at 3.15pm, and Bath away to Leinster at 5.30pm.

In France there is no particular penchant for Friday night matches, and the only occasion beIN Sports will show Top 14 teams on Friday night will be in round six when it is obligatory for one of the pools to be concluded with simultaneous kick-offs.

The Sunday afternoon double header is more to French tastes, as well as Saturdays, and so, for example, this coming weekend France TV’s choice for its free-to-air match in their 3.15pm Sunday slot (4.15pm French time) is the Pool 5 all-French clash between Montpellier and Toulon, which beIN Sports will also screen.

For its part, beIN Sports also opted for the games involving Lyon (in Glasgow) at 1pm, Toulouse (at home to Wasps) at 3.15pm, and Castres (at home to Munster) on Saturday.

Once BT and beIN Sports, along with France TV, had decided upon the schedules to ensure a broad base of English and French clubs across the different slots, Leinster and Munster were destined to be playing simultaneously for the first time in the competition’s history.

This never happened when Sky was the tournament’s primary TV broadcaster in the UK and Ireland as Sky built up a higher percentage of viewers in Ireland than  BT has so far.

Despite this, the clash has not affected the projected attendance for the Leinster-Bath game, which is being held in Leinster’s customary tea-time slot for their round four pre-Christmas game at the Aviva Stadium.

Sales have exceeded 42,000, already up on the 40,064 for the corresponding game against the Exeter Chiefs last season.