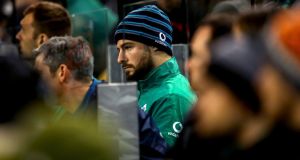 Robbie Henshaw could miss the start of the Six Nations Championship after a further assessment on his hamstring injury suggested he could be out for up to another eight weeks.

The Leinster centre picked up the injury in the week of Ireland’s game against Argentina last month. Initial prognosis was that he would be out for four to six weeks - but the injury is more severe than first appreciated.

If the upper end of the timeframe was accurate then Henshaw would miss Ireland’s opening game of their Six Nations defence against England at the Aviva stadium on Saturday, February 2nd (4.45pm).

His absence is a significant blow for Leinster as they try to negotiate their back-to-back matches against Bath and he would also miss the round five and six fixtures against Toulouse and Wasps in January.

Leinster are optimistic as of now that Johnny Sexton will be available for Saturday’s return game against Bath at the Aviva despite the outhalf limping off with a calf injury in last weekend’s 17-10 victory at The Rec.

Dan Leavy and Jordan Larmour came through the game with no ill effects as did second half replacements Jack Conan and Rory O’Loughlin.