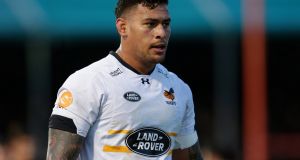 Nathan Hughes of Wasps who are unbeaten in their last 12 home matches against Top 14 opposition, winning 11 and drawing one. Photograph: Henry Browne/Getty Images

The winner here could potentially move to the top with Munster and Castres playing tomorrow. Exeter arrive without their injured England star, Jack Nowell, who has beaten more defenders (15) than any other player in the opening two rounds.

Exeter centre Ian Whitten was saying during the week that they had to learn from their first Premiership defeat of the season, 28-26 to Harlequins.

Still they are second in the Premiership table, one place ahead of Gloucester, who they beat 23-6 in the league last month. Bragging rights for Exeter then, needing a first pool win.

Hogg, Seymour, DTH van der Merwe and Peter Horne in the Glasgow backline gives them pace and class. No one has so far made more tackles (48) than Johnny Gray who is back in the pack.

Coach David Rennie has made 12 changes from last week. Leading their conference in the Pro14 Glasgow travel to France knowing Lyon have lost their last two home games in Europe, despite leading at half-time in both. Glasgow beat Cardiff in round two but will face a strong Lyon side who at fourth have been having a good spell in the Top 14.

Two star-studded teams clash. Where to look for strengths and the answer is everywhere if the names say anything. But the reality is that neither side has been going that well in the Top 14 with Toulon in 10th place with just four wins and Montpellier in ninth place with five wins in 11 matches.

Toulon will be looking to keep a run of four European matches against Montpellier won by the home side intact. But the three-time champions have lost their last four games in the tournament. Home advantage, however, could be the deciding factor.

Toulouse, who have already beaten Leinster in France, will remain top of Pool One if they are able to defeat Wasps in Coventry. The last six meetings between the two clubs are evenly split with both teams winning two games apiece in addition to two draws.

But Wasps are unbeaten in their last 12 home games against Top 14 opposition (W11, D1), and their one draw in that run was against Toulouse two seasons ago. Dai Young’s side have drawn and lost their opening games, so win or bust.

Ambitious Cardiff won the Challenge Cup last year and have an attractive attacking style of playing. But Saracens are coming in off the back of a 29-6 win over Wasps at the beginning of the month, their ninth win in nine outings that has them on the top of the Premiership table. Only Exeter have more try bonus points.

Cardiff have big ball carriers in Nick Williams and Samu Manoa and have won their first two pool matches. Looking strong at home, they will have to come with all of their tools sharpened.

Racing are one of the four clubs with two wins from their opening two matches while Leicester winger Jonny May, admitted this week that it had been a “tough” few days since the Tigers 31-point loss to Bristol last weekend.

Leicester are clear underdogs facing into this clash with the star-studded French side, who are fifth on the table in the Top 14. Leicester are eighth in the Premiership with three wins in nine matches. Leicester will have seen the Racing attacking master class that put 44 points on Ulster earlier in the season.