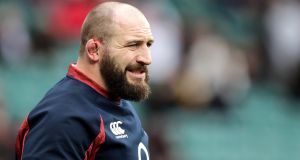 Rugby’s disciplinary process and value system has decreed that genital grabbing merits more than twice the punishment for a dangerous and recklessly high tackle, which itself is only marginally worse than a punch.

This follows the outcome of the Guinness 2020 Six Nations disciplinary hearings which has led to a four-week suspension for Manu Tuilagi after he was found guilty of an act of foul play with his dangerous charge at the Welsh winger George North in England’s 33-30 win at Twickenham last Saturday.

As for Joe Marler, he also accepted he was guilty of foul play when grabbing the genitals of the Welsh captain Alun Wyn Jones in the same game, which created an altogether greater furore, but despite also maintaining it did not merit a red card, he was suspended for 10 weeks.

By contrast, although found guilty of foul play for a dangerous tackle on Jones in the same game, a disciplinary committee decided this did not merit a red card and so Courtney Lawes’ citing was dismissed.

Following on from the three-week ban handed out to the French prop Mohamed Haouas for punching Jamie Ritchie in France’s defeat by Scotland, of the three hearings against the trio of English players which were held in Dublin on Thursday, Marler’s will again draw the most attention.

However once they found him guilty, in large part, the disciplinary committee of David Hurley (Ireland), Sarah Smith (Scotland) and Stefan Terblanche (South Africa) were dictated to by World Rugby guidelines. By infringing law 9.27 (acts against the spirit of good sportsmanship) when, to quote the Six Nations statement “in the first half of the match, he grabbed, twisted or squeezed the genitals of a Welsh player” such an act of foul warranted a low-end entry point for such an act, which is a 12 weeks’ suspension rising to a maximum of 24 weeks.

This was reduced by three weeks, according to the Six Nations statement, “to take account of mitigating factors (including good character and remorse) but increased it by one week to take account of his most recent disciplinary record.”

Unless Harlequins reach the Premiership play-offs, Marler’s season could thus well be over as, pending an appeal, he is ruled out for his club’s last nine games of the regular season. Although only 29, having come out of international retirement to play in the Rugby World Cup, this could conceivably spell the end of his test career too.

What Marler did was an appalling example for the young supporters watching the game and outraged many. It was also a badly misjudged and provocative act, but not especially malicious, and certainly not as potentially dangerous as Tuilagi’s no-arms, flying tackle on North, who was dipping in the tackle.

Tuilagi was cited after being sent off by referee Ben O’Keefe in the 75th minute at Twickenham. Tuilagi accepted that he had committed an act of foul play but (although he appeared to apologise to North as he left the field) did not accept that it warranted a red card.

The disciplinary committee thought otherwise, deciding his dangerous tackle merited a red card for an infringement of law 9.16 (dangerous charge).

Also in stark contrast to Marler therefore, Tuilagi will merely miss Leicester Tigers next three games before returning for their final half dozen matches in the Premiership.

Go figure. Marler’s action may have been particularly repulsive to some, and clearly angered Jones, whose experience probably helped him refrain from retaliation. But however unedifying, Marler did not appear to be genuinely trying to hurt the Welsh captain.

When Tuilagi was launching himself toward North in an effort to protect the English try line, he was undoubtedly doing so instinctively. But the tackler has a duty of care to the player he is attempting to tackle, and Tuilagi failed in that obligation. His act of foul play could have had far more serious repercussions for North.

As with Marler and Tuilagi, Lawes also accepted that he had committed an act of foul play, but he did not accept that it warranted a red card. His disciplinary committee, which comprised David Hurley (Ireland), Sarah Smith (Scotland) and Donal Courtney (Ireland), agreed that his tackle on Jones did not warrant a red card and so therefore the citing complaint had not been upheld.