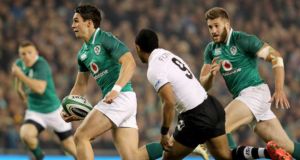 Only as good as your last game, Joey. Feels a little irresponsible not to highlight the place-kicking. For the wonder that is Carbery, this Kiwi of pure Irish ancestry, dating back to the first Celts we are reliably informed, can warm any freezing soul on this November night.

Carbery and Johnny Sexton should be joined at the hip until the plane home from Japan in 2019. Kicking practice must be followed by Carbery teaching Sexton how to stoop down to the boot laces.

‘Look, Johnno, how oak trees like Nemani Nadolo are felled.’

Or not. Just steal every element of Sexton’s now flawless routine and let the game’s most accomplished flyhalf lose his temper and get stunned come the next monumental outing.

For we know this: Carbery is born to play Test match rugby. Reared for it.

We felt something was awry the morning before Ireland’s game in New Jersey last summer. There sat Ronan O’Gara among the second string of travelling scribblers lauding the kid he had shadowed all week.

“It’s probably a big statement but he could progress along the lines of Beauden Barrett,” said the Canterbury-bound Cork man who boasts 130 Test matches to Carbery’s six caps.

The 21-year-old stank the joint out. Gifted the US Eagles 14 points.

Now we are here and he’s injured again. But what a thrill he brings.

That was Joey Carbery’s first start in green. This was his second.

He’s more meat on him but Joe Schmidt has a clear problem. Before this he had six minutes at outhalf this season (450 minutes at fullback).

Leinster, probably via Stuart Lancaster’s prompting, just wants Carbery on the field but every time Sexton is put on ice, Ross Byrne – a competent player – wears 10.

Because this kid, 22 now, is electricity incarnate.

The position for anthems, between Darren Sweetnam and Dave Kearney, was significant. Wingers get paid on Joey’s watch. So do his centres (a word to the wise for Stu McCloskey is imminent – keep flinging offloads into touch for Schmidt’s Ireland and the ticket to France will come sooner than Simon Zebo).

The loop was constant but it’s different to Sexton’s version as it comes with a hitch-kick, a dash into invisible space.

Not seven minutes were clocked when Carbery’s toes tipped into the red zone before a left-handed bullet was gathered and finished by Sweetnam.

He missed the right touchline conversion.

“He has that antipodean style,” says Shane Horgan (another son of a Kiwi), “Like Israel Folau . . . ”

Barrett and Folau. The ultimate comparisons from these men.

Life is good. Never lasts. High praise demands consistency as its rider. We saw that. We really did after Jale Vatubua got sick of this willo-the-wisp dictating affairs behind the gainline. Pass, loop, pass on and then wallop. The marriage of fillings and ribs.

Crumbled Carbery stays down. The replay confirmed whiplash. He found his breath and went on. Only eight minutes played.

His defensive reads are class. He almost cut out a three man Fijian overlap, with Nadolo lurking, but a one handed flick by Dominiko Waqaniburotu had Ireland scrambling. Individually Fiji are masterful.

It would be great to see the Pacific Islands get the 2027 World Cup.

The other flanker, Akapusi Qera, swathed him off but he hopped back up. Lower, Joey murmurs to himself, go underground and they always fall.

A nice pass has Sweetnam streaking again. Calling the shots to Rhys Ruddock and the heavies. This way, that way, men, says the prince.

The Dave Kearney try started from his hands. McCloskey took the disguised ball, carried, fed Andrew Conway, who carried, and put Kearney over near the flag.

Carbery’s kick hits the post. Close but flawed. Such missed shots are not allowed at this level.

Nadolo runs hard. Carbery disappears under his shadow but the giant falls. Carbery leaps up. This happens a few times. Sometimes they go clean over him.

“I think he’s the kind of player that the more difficult the scenario or picture in front of him the better solution he finds,” said O’Gara.

29 minutes: Nadolo’s wing again. The freak grubbers but Carbery slides to the rescue, covering the ball with his body as he lets it trickle over the touchline. Irish throw. Calm, clever, relief.

Converts Jack Conan’s try. One from three as Ireland lead 17-3. No panic.

Early in the second half his fullback roots are revived with excellent high fielding but the game is no longer under his command.

It’s 17-17 and these massive Fijians are enjoying themselves.

“It’s a case of when you play in Ireland and it’s wet you need that kick...”

O’Gara’s words ringing in his ears as he mimics the Munster icon with a touch finder.

60 minutes: More pain. More time with the medics. A step off both feet is welcomed by a 120 kilogram belt off sub prop Peni Ravai.

Broken, he departs holding his immovable wrist. Ian Keatley is the current alternative. No word on when Paddy Jackson will return. Ian Madigan is kicking the lights out in the lower English levels.

Still Joey’s game. A talent that’s a joy to behold, worth the ticket on this night, but the lessons are all there. Rugby, now more than ever, destroys lightweight talent. That’s just the harshness of it all. More meat required as O’Gara’s summer council echoes.

“He’ll find in test rugby he just has to play the other guys around him. But his capacity to learn - well, it’s not surprising when you have talent at that age and he has the application to get better. He has that in his drawer as well.”