Late tries give Argentina victory over Italy in Florence 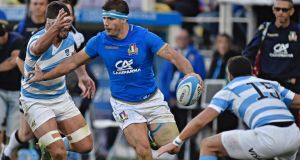 Argentina scored two tries in the last 10 minutes to claim a 31-15 win over Italy after a see-saw Test match in Florence on Saturday.

The lead changed nine times and Conor O’Shea’s side led 15-14 on the hour before Argentina broke loose in the last 20 minutes with converted tries by Marcos Kremer and Joaquin Tuculet for only their second win this year.

Sebastian Cancelliere scored the other try for Argentina in the first half.

Hernandez, temporarily replacing Sanchez, opened the scoring with a penalty for Argentina but Italy hit back with two quick Canna penalties. Cancelliere ducked between the Italian back line to score the game’s first try.

The two sides took it in turns to score and take the lead until, with Argentina 17-15 ahead, Kremer powered through Jayden Hayward’s tackle to give the Pumas breathing space.

Tuculet finished off an Argentina attack by diving into the corner for another try on his 50th appearance as they extended their unbeaten run against Italy which goes back to 2008.

1 Winning Triple Crowns: ‘Seeing Jack Kyle was a spiritual experience’
2 ‘Your father works for my father’: Schools rugby turning toxic in the stands
3 Few, if any, have given as much to Munster as Garrett Fitzgerald
4 On healing and wild hurling: The re-education of Diarmuid Lyng
5 Wexford best the weather and Kilkenny on a mad day to be hurling
Real news has value SUBSCRIBE