Liam Toland at the Aviva Stadium 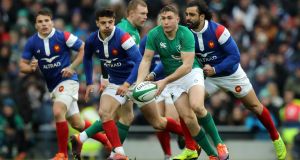 To distil the difference between the sides at the Aviva Stadium yesterday just examine Keith Earls’s try. An Irish lineout with yet more variety got the ball to CJ Stander and out of nowhere, Earls popped up and cantered home.

Of course, Earls didn’t just pop up out of nowhere, as this play was a cornerstone of Ireland’s unpicking of France. Throughout the match Ireland set up plays, traps if you like, where the ultimate intention was to attack the pillar defender.

For Earls try, tighthead prop Demba Bamba – like so many of his team-mates before him – followed the ball and abandoned his post. Defensive structures fluctuate, but what’s infuriating about this Bamba defensive error – leaving the pillar and not pushing forward into the space – is that it’s pre-1990’s fare. It was embarrassing and Ireland kept knocking on this particular door.

Rory Best's lineout was creative, full of variety and accurate where the ball hit the catcher’s hands at the apex of his jump

As expected, Ireland brought an entirely different approach to the gain line. Joe Schmidt’s side won 99 per cent of their ruck ball in Rome but much of this came while going backwards.

Yesterday, the Irish ball carrier was sprinting onto the ball with one intention – to cross the gain line. They did so by adding variety, changing the point of contact through tip ons, circle passes, backdoors, decoy runners etc. But they also went forward with purpose from their lineout and lineout mauls.

A word about Rory Best and his last Six Nations match in Dublin. His lineout was creative, full of variety and accurate where the ball hit the catcher’s hands at the apex of his jump. As discussed recently, and in view of Sean Cronin’s heavy punishment, lots of elements that didn’t work in Rome came together yesterday for the lineout to click. It must be pleasing for such a modest but crucially important leader like Best to leave Lansdowne Road in this fashion.

‘Jouer, jouer’ is not going to get the job done

Other areas exposed France. Ireland’s exit strategy and kicking game forced Yoann Huget into decisions. He couldn’t cover the back field as Ireland fed their midfield, forcing the French fullback to push up. This allowed Garry Ringrose and others to find space and grass in behind.

Jordan Larmour was especially good in the opening stages. The Irish fullback was very similar to Rob Kearney, running the ball back in both hands but with the added bonus of a shot selection from the boot. Larmour is clearly a broken-field runner to put fear into any defence, but especially one as lazy as the French. Wales are not lazy, far from it in fact and are less likely to tolerate Larmour’s mazy running.

It is ridiculous to expect a French team that was thrown together a few weeks ago, led by a coaching ticket of such limited experience, to perform in this elite professional era and hope to survive the Schmidt analysis and execution. “Jouer, jouer” is simply not going to get the job done. The Baa-Baas, with one week’s preparation infused with plenty of socialising, would come up with more structure, more plays and more ways to trouble the Irish defence than France could muster.

The gulf was highlighted in lineout maul and maul defence. This takes years and brilliant coaching to perfect, and will never survive the chopping and changing of methods

In fact, in the opening 40 minutes not one Irish player was asked to make a defensive decision. Yes, Ireland tackled more than 100 times over the course of the game, but none required a decision. Take the cracking turnover bullying steal by Mathieu Bastareaud on Ringrose at 11 minutes. France got possession and could counter, but Andy Farrell’s defensive structure immediately kicked in. No sooner had France looked up than Ireland had 14 men set in defence. Chance gone. In fact, France simply couldn’t get out of their territory in that opening half.

But the gulf was truly highlighted in lineout maul and maul defence. This takes years to perfect and will never survive the chopping and changing of methods and systems. This requires brilliant coaching to perfect. I hated mauling, but clearly Simon Easterby and his forwards have put huge effort into this crucial aspect of the game. The Irish maul defence did suffer when personnel were changed, but it remains a great tool and one that will be exceptionally useful in Cardiff next Saturday.

A word too on the other set piece – the scrum. What a match both Irish props had, but can someone clarify the legality of French number seven Arthur Iturria scrummaging in the channel, leaving his tight head prop Bamba to engage Cian Healy. The bind? To my mind this is not legal, it is certainly dangerous and should be called out by the officials.

Both Healy and Tadhg Furlong offered huge amounts. Furlong’s clear outs were both technically brilliant and brutally violent to ensure any 50:50 breakdown ball remained in Ireland’s possession. In fact the speed with which he spots a vulnerable breakdown and executes an action is at complete odds to the French.

Healy also provided dominant gain-line bursts like many of his colleagues. These dominant gain lines change everything and open up all sorts of possibilities. But a key question remains in preparation for Wales.

Can Ireland’s new-found gain-line play dominate sufficiently to unsettle the Welsh defence re-set? If yes, well then, an upset is possible, if not, Wales will be Grand Slam champions.