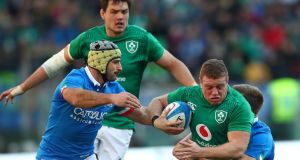 For several seasons I’ve felt that what God left out of Italian rugby, Conor O’Shea couldn’t put in, but for much of Sunday’s match it was Ireland lacking divinity in the Eternal City.

Italy didn’t win, but much of their game was superior to Ireland’s. One such area was maximising turnover ball and, unfortunately, Ireland gave them plenty. The best example was Edoardo Padovani’s try off an Irish lineout turnover.

The comfort the Italians have in broken field play can’t be a coincidence and is worthy of benchmarking against Ireland, who created more than enough to rattle up a healthy score but lacked accuracy in the open field. Let’s not forget that Ireland enjoyed 58 per cent possession and 56 per cent territory, yet didn’t enjoy the freedom of the fixture. For that Italy deserve huge credit – Ireland less so.

Watching in real time, one question sprang to mind. Do Ireland require perfection off set-piece in order to run their classic moves? Should it break down, where to next?

In answering this my heart completely sank for Seán Cronin, as the lineout stats will be most stark. I have huge sympathy for the hooker because not only do I adore watching him play, but more significantly because the lineout unit malfunctioned in tandem. Take the third lineout miss by Ireland on 32 minutes, which had Quinn Roux as the target and Jordi Murphy lifting behind.

Roux is many things but hardly a bhradáin léim. Italy were contesting in the air which meant Cronin had to select the correct arc of entry for the ball. A deep arc, to beat the Italians, requires more accuracy but equally a more accurate cohesive unit, timing and hang time from the intended target.

Even John Hayes would struggle to hoist and hold Roux at the top for sufficient time to secure the ball. The timing was all out. Roux was one-handed and wasn’t secured long enough at the pitch of the throw. Poor timing? Poor lineout call? Poor lift? Poor hang time? Poor arc? The net result was that it missed and Italy scored by being better on the ball than Ireland and maximising the turnover.

The first Irish lineout was five metres out from Italy’s try line. Ireland stuffed in nine players, including Conor Murray, Bundee Aki and Chris Farrell, with Seán O’Brien at scrumhalf. Peter O’Mahony was fired up in the air but the ball was overthrown and missed the target. The second Irish lineout miss was on 14 minutes with Roux the target at the tail.

He was lifted by the big man Tadhg Furlong from behind and O’Mahony at the front. This lift got Roux into the air and held him there, but Italy’s Dean Budd got up just in front of Roux and stole the ball. This is unfortunate as the throw was on target, but for the interception. The only possible option/variant was the arc of flight. Three misses but arguably only one hooker malfunction.

Body language is huge. Big moments generate big lifts. Zebre’s powerful scrum win before half time over Leinster last weekend is an example, but so too is the precious breakdown steal by Peter O’Mahony in this game. In doing so he stunted an Italian attack, but the body language reaction from his team-mates was muted. Why were there no big energisers?

Ireland found themselves in the trenches and Italy loved it; Ireland didn’t, and an element of fear slipped in. Conor Murray became frustrated by his fringe auxiliaries who just weren’t quite on his wavelength. And maybe that’s the story of the day – being on the wrong wavelength. The lineout lifting pod and the hooker. The scrumhalf and the flying first receiver. The reshuffle of Keith Earls into midfield and yet more wavelengths eroding the famed Joe Schmidt attention to detail and the accuracy he requires.

For a period the Italy scrum had their second row Budd on the flank, where this defensive vulnerability was not exposed by an Irish backrow move. What happens when the wavelengths are off? Was there a player in green capable of recalibrating in real time? The evidence would suggest not and, with that, harsh realities with the World Cup in mind.

But for all that, the opening Irish try brought with it 19 phases of total rugby, full of accuracy and flat line receivers charging at the Italian defence. The home team were certainly comfortable coming off the line but throughout those 19 phases Ireland revelled in the corridor of power – taking it flat, tipping it on, pulling it back and so on with extremely accurate breakdown clearance before Roux crashed over for the score.

Yet while all this was happening, I couldn’t help feel Italy’s cheap penalties were covering over Irish frailties. Murray’s first exit kick went too far, he was dispossessed twice, Ireland missed touch, Seán O’Brien’s penalty having overrun Earls, and so on. In fact this passage is an insight into the degree of accuracy required. When it breaks down the team break down.

The pity from Ireland’s point of view is that Italy are also far from quality, as they also malfunctioned, and Jacob Stockdale’s try was, while brilliantly taken, embarrassing. Poor wavelengths leading to poor (bonus point!) performance with precious few stepping up.

PS Is the breakdown offside line an “option if you like law”? Not one team honoured this line all weekend. That England were particularly outrageous in Cardiff is irrelevant in that all the teams transgressed. Ireland included.

1 Betting shops face uncertain future as they prepare for Monday reopening
2 Tianna Bartoletta: ‘After you’ve gotten your medal, you become black in America again’
3 Sideline Cut: Marcus Rashford proves himself a leading man off the pitch also
4 NFL admits league should have listened earlier to players protesting
5 Ian O’Riordan: An education in race and running during college days in America
Real news has value SUBSCRIBE